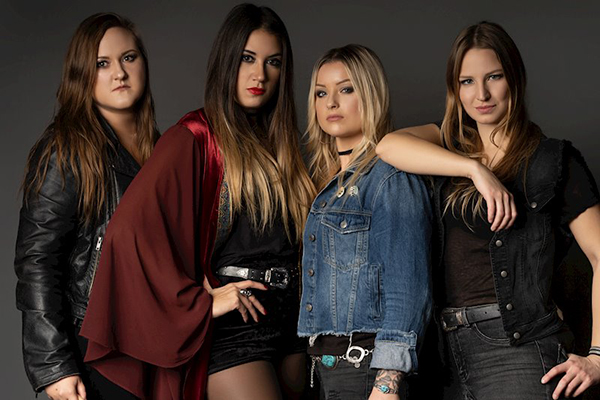 THUNDERMOTHER released a new video for the single ‘The Road Is Ours’, the album ‘Heat Wave Deluxe Edition’ 2CD will be released on May 21st via AFM Records.

The band’s current album ‘Heat Wave’, released in July 2020, is a rock sensation that you cannot avoid. It stormed the charts and achieved big results in many countries, including #6 in Germany.

Now the new video & single “The Road Is Ours” by Swedish powerhouse Thundermother is released – the follow-up of the hit-album “Heat Wave”. Phat hot groovin’ Hard Rock from first to the last note is heralding the release of special deluxe edition of the highly acclaimed masterpiece.

On May 21st, 2021, Thundermother will release “Heat Wave Deluxe Edition” as a 2-CD digipak and additionally with various limited coloured double vinyl versions. Not only can you find the complete original album on it, but also a bonus CD / vinyl with no less than 10 other previously unreleased tracks. Three brand new songs, including this new single, previously unreleased live tracks, and acoustic versions of the ‘Heat Wave’ singles featuring two guests: Jesper Binzer (D-A-D) and Dregen (Backyard Babies/Hellacopters) are joining the band on this Deluxe Edition.

Whether with the lyrics or the arrangements – Thundermother’s heart and mind are in the details. The Danish hard rock hit guarantor Soren Andersen, an experienced producer and gifted guitarist who has already worked for Glenn Hughes, Mike Tramp, Dave Mustaine, Tommy Aldridge, etc., took care of the fine-tuning. From the beginning there was a great emotional and creative harmony between the producer and  Thundermother. This is clearly noticeable in the songs.

The result: The sophisticated version of an AC/DC / Motörhead sound, with fresh, modern hard rock elements, accompanied by a full 70’s groove. Thematically, the songs deal with the whole spectrum of life. From love ballads to blues pieces to party smashers – there is something for every mood. With her blues-soaked voice, the charismatic front woman Guernica Mancini gives the songs a unique touch and refines the “Heat Wave Deluxe Edition” into a must have for every fan and those who want to become one.