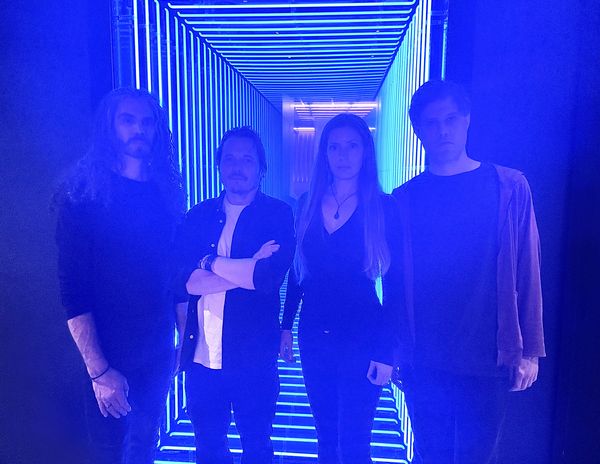 The quartet instrumentally depict the realms of surrealism and science-fiction through eclectic and improvisational passages, juxtaposed by fluid grooves and metallic flurries. Their debut LP, Cactides, was released through Nefarious Industries mid-2020 to critical acclaim, and now the band returns with its follow-up, Vonals.

With six new tracks encompassing more than forty-five minutes, TITAN TO TACHYONS’ Vonals is a mesmerizing and entrancing album, as alluring as it is unpredictable. Spaced-out free-flowing jams merge with explosive metallic outbursts as if the listener was watching a time-lapse video of the cosmos forming from an ominous jazz lounge in a David Lynch film.

The dueling bass of Dunn and bass VI of Hollenberg create a web of intricately developed low-end flow over Grohowski’s hammering buildups and fills, while Gates’ instantly recognizable technical axemanship blooms with both finesse and volatility.

Tzadik Records will release the album on CD only, no digital release, on September 16th. Watch for additional updates to post over the weeks ahead.

TITAN TO TACHYONS has been performing throughout New York City over recent months and will support the release of Vonals with an East Coast tour running from September 28th through October 2nd. See the confirmed shows below and watch for the remaining venues to be confirmed and announced alongside details for a New York City release show for the album in the days ahead.