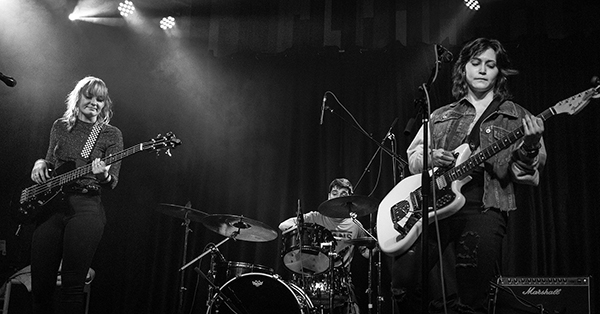 TOUGH ON FRIDAYS will release their new single ‘Cabin Fever’ via Golden Robot Records on 3rd May. It will be available on all digital platforms.

Well-seasoned performers throughout the Texas music circuit, grunge-pop-rockers TOUGH ON FRIDAYS have kept the momentum flowing over the last 5 years. The band has been turning heads and gaining throngs of fans for their ability to artfully smash together pop, indie and grunge into their own brand of infectious, in-your-face rock ‘n roll.

Melding pounding drums with dynamic guitars, TOUGH ON FRIDAYS’ ‘Cabin Fever’ is a melodic tapestry filled with a kaleidoscopic swirl of colours. Hard-hitting in itself, the melody suspends you in mid-air, however, it is Caleigh Oceguera’s elegant execution of painful lyricism that pushes you over the point of no return. Soothing with an underlying desolation, ‘Cabin Fever’ is a harmonic cascade of spine-chilling, soul-stirring music

ABOUT TOUGH ON FRIDAYS

Tough On Fridays have come to be known for their enthusiastic live shows. Caleigh (songwriter/guitar/vocals) and Carly (bass/vocals) pair up to create an alluring energy that the music scene has not seen in many years. This energy combined with their fresh sound leads Tough On Fridays to really stand out among the crowd.

With their reputation for captivating their fans and their consistent delivery of great music, Tough On Fridays has been able to keep both music critics and fans alike enthralled.

“What you get from Tough On Fridays comes straight from the heart and soul. Edgy indie with rollin’ bass fuzz, clobbering drum hits, shimmering guitar buzz, and bold-as-brass vocals. Bingo!”  – Turn Up The Volume

The chaos of 2020 could not slow down the runaway train that is Tough On Fridays. A string of singles and their full-length album A Fantastic Way To Kill Some Time provided raw emotions and a powerful modern grunge-rock sound. The album showcases the most mature and well-rounded Tough On Fridays to date, showing real commitment to their growth and progression.

Their hard work has not gone unnoticed, bringing in attention from record labels as well as fans. Tough On Fridays has recently signed to Golden Robot Records out of Sydney, Australia to take their sound international. Their drive is unending, don’t miss out on what comes next!