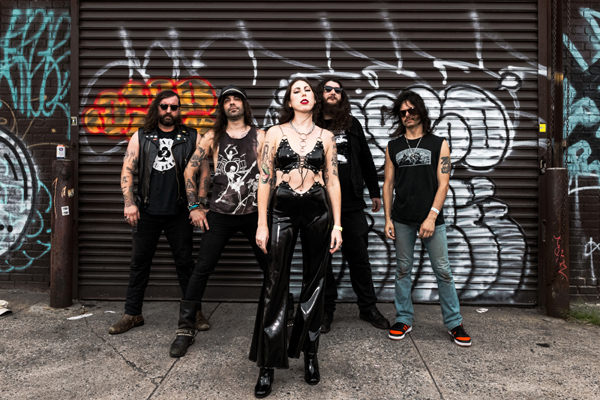 NYC true metallers TOWER have released the first single from forthcoming album Shock To The System. A music video, created by Gabby Vessoni, for “Blood Moon” is available at the following link: youtu.be/SBiuqd300KI.

The single is also streaming on Bandcamp.

TOWER will release their sophomore studio album, Shock To The System, via Cruz Del Sur Music on November 12 in Europe and November 19 in North America.

The album was recorded in May and June at Artifact Audio in Ridgewood, New York, with Sasha Stroud serving as co-producer and engineer. The album’s cover was created by Morgan Jesse Lappin.

According to vocalist Sarabeth Linden, half of the music and lyrics for Shock To The System were written during the recent lockdown attributed to the global pandemic.

The result is TOWER’s most complete outing to date — a veritable metal call-to-arms that combines the band’s energetic brand of NWOBHM and classic rock into ten anthemic cuts.

“We stayed centered around our established style but took it to new levels in some places,” says Linden. “The heavy parts are heavier than before, the fast parts are faster, the slow parts are slower, and one song is around seven minutes, which we’ve never come close to previously. Musically, there are a lot of firsts on this record.”

TOWER (who is completed by the guitar tandem of James Danzo and Zak Penley and drummer James Jones) only has one previous full-length studio album to its credit, 2016’s self-titled outing.

While its 2019 Tomorrow & Yesterday EP featured four songs of rocked-up metal, Shock To The System takes TOWER’s sound to the next level.

“It seems so long ago now. The songs that are still in the live set, like ‘Flames’, ‘Raceway Rock’ and ‘Elegy’ are still very much in the vein of the new material. The EP was a bit more simple and aggressive, and those elements are on the album, too, but manifest in a different way. In general, we have grown a lot as a band and as individuals. We’ve matured, and it’s reflected in the music.”

TOWER recently celebrated its return to the stage in July. With Shock To The System in the can, the band plans on preparing for future live dates — and a new bassist.

“We’re in the process of revamping the lineup for tour, as Jeff Filmer stepped aside to give his full attention to his bands SHADOWLAND and HUSTLER,” closes Linden. “We’ll be ready to hit the road by year’s end. See you soon! Be prepared!”