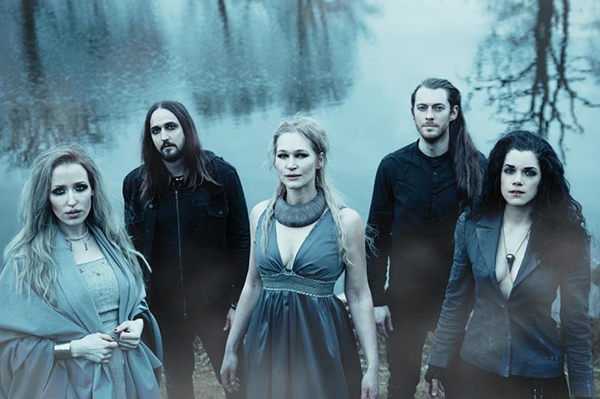 “One – In The Dark” is the first out of four chapters, in which TVINNA breaks down the different stages of life – each linked to one of the four elements. The debut album is focusing upon the first chapter of our life: the state of being unborn and the process of birth – reflected through the element of water in its different shapes. Each of the 9 songs on the album tells a story about where we come from, are made of and are born into. One living being, out of the dark, connected and dependent.

TVINNA musical evolution has been constant since the release of their first song “The Gore” in November 2019. Best described as progressive dark and electronica pop, the music marries multi-layered vocals to effect-accordion and electronics, accompanied by new metal influences on guitars, bass and drums. TVINNA are intertwining and summoning an intense and unique musical experience. All the songs and imagery (artwork, video) are created, written and produced by an intensive alliance between Laura, Fiona and Fieke.

“We’ve created our own unique sphere through TVINNAs musical style – showing the depths of our inner reality in a more intimate way than ever before in this very first album. “One In The Dark” shows a musical side of us no-one has heard before! Where “The Gore” was like an introduction into the sonic landscape of TVINNA, the rest of the album really takes off into raw emotions and with that a more raw and heavy sound.” – TVINNA

““Kreiz” is Old High German for „Circle” or „Ring” and the lyrics are like a spell. It’s about detachment and release, about letting go and finding the strength, bravery and daringness each woman – and man – has within. It’s about finding this source within yourself, accomplishing the inchoate and making a force out of it, that no one could ever take away. We are very proud to feature outstanding Faroese Singer Eivør in Kreiz, adding her very own enchanting note and trademark “beatboxing” to it.“

The band adds on the new video:

“”As “Kreiz” is telling about finding inner strength and courage, we wanted to put this song into a video with strong women acting in it. We had the amazing opportunity to work with Erik Wildeman (camera & postproduction), Femke van Hilten (production assistant), Bram van Workum (colorgrading) and enchanting actresses Ines Rehberger and Samantha Evans. Based on a script written by Fiona, they managed to capture our music’s message perfectly into a compelling video.
Filmed on Fiona’s very own land, again with all props handcrafted by members of TVINNA. This video has been a personal journey and we couldn’t be more proud of how it turned out. Return to yourself to find peace in your silence. Find strength within yourself.“