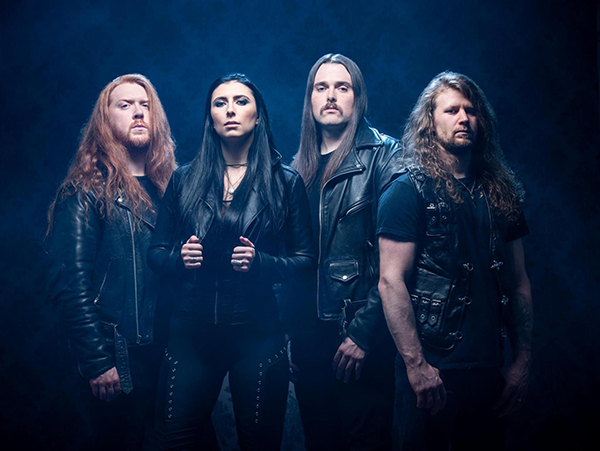 UNLEASH THE ARCHERS return to Europe!   Vancouver, Canada based UNLEASH THE ARCHERS were formed in late 2007 by vocalist and front-woman Brittney Slayes, together with her partner and the band’s drummer Scott Buchanan. Spanning the gap between various forms of metal, genre-blending has become their speciality, and the resulting product is a potent mix of intelligent song-writing and technically versatile musicianship.
Guttural screams likened to blackened death combined with the soaring wails of a four-octave mezzo-soprano in power-metal style have created a sound unlike anything else in the industry.
UNLEASH THE ARCHERS have been described as “show-stealers” and “wildly entertaining” by fans and peers alike, and they strive to put on a show that will stick with you long after you’ve left the venue. Since having signed to Napalm Records in 2015 the band broadened their fan base extensively which they will continue to do with their extended Soul-Bounding Across Europe 2021 tour.

Brittney Slayes states:
“I think it goes without saying that we are all insanely excited to see live shows start happening again.  Not being able to tour for the last year has been agony, and not just because we love playing music; we miss our fans like crazy!  We can’t wait to see all your smiling faces and hang out with you all at the shows.  We are also beyond stoked to get to play the new album live for the first time as well!  We’ve loved hearing from everyone what their favourite songs are and we just know we are going to hear your voices loud and clear on the ‘Soul-Bounding Across Europe Tour’ this winter!  See you on the road real soon!”

Main support on Soul-Bounding Across Europe 2021 will be coming from the Canadian five piece STRIKER, one of the leading bands in the New Wave of Traditional Heavy Metal movement. The Swedish/American/Brasilian Power Metal force NORTHTALE will be opening the night.