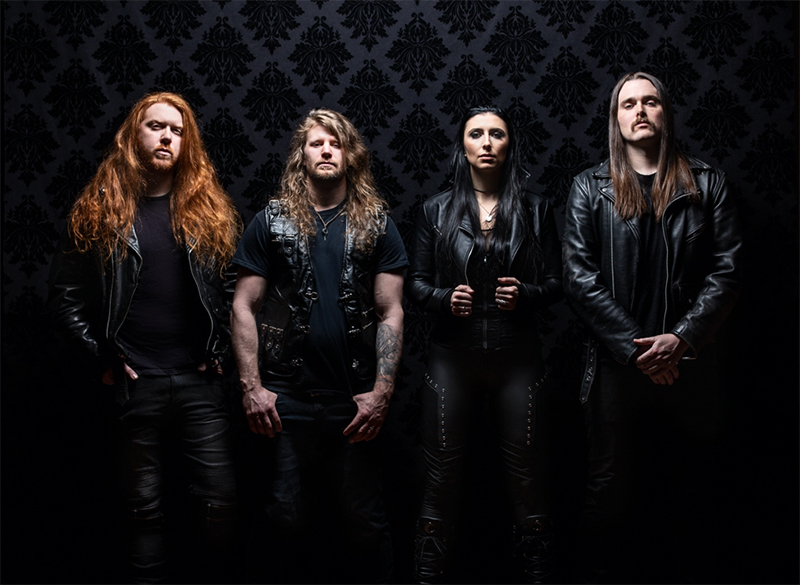 Canadian melodic power metal quartet UNLEASH THE ARCHERS recently announced the upcoming release of their masterful fifth full-length concept album, Abyss, out August 21, 2020 via Napalm Records. With Abyss, the band re-cements themselves as an unequalled, undeniable metallic force with their strongest album to date.

Today, as a follow-up to the otherworldly first single and video “Abyss”, UNLEASH THE ARCHERS have unveiled another blazing new single, “Soulbound”, alongside a cinematic, high-concept music video. Powered by Brittney Slayes’ powerful mezzo-soprano, the virtuosic guitar stylings of Andrew Kingsley and Grant Truesdell, and the thunderous drumming of Scott Buchanan, “Soulbound” pulls the listener into a melodic, lightning-fast journey. Its massive chorus and skyrocketing symphonics will echo in your ears for days to come!

Frontwoman Brittney Slayes says about “Soulbound” and the music video concept:
“This song is what we call a ‘quick-banger’ in the UTA camp. It’s short, fast, catchy, and never lets up. We always have one of these on every record; the kind of song that makes you want to turn the dial up to 11, maybe drive a little faster, perhaps even stand up and headbang by yourself in the middle of the room. This track re-introduces the four sons of The Matriarch as enslaved, unstoppable, half-dead beings that won’t give up until The Immortal is destroyed, and we feel like it can stand on its own while not giving too many of the album’s secrets away… Get out your air-guitars ’cause this one is blistering!”

The video was shot by Runegate Studios in Victoria BC, Canada and uses two very different environments to differentiate between the world of the living, and the world of the ‘Soulbound’. The bright, white, indoor scenes portray a reality much like our own, while the dark, rain-soaked, outdoor scenes take the viewer to a visually stunning reality that will give you goosebumps and make your skin crawl!  In this dismal place, The Matriarch has complete control over the Soulbound, and she can compel them there whenever she desires, no matter how hard they may resist.”

Thematically, Abyss is the direct sequel to the band’s 2017 album Apex. Beginning with a dreamlike acoustic introduction accented by the smoky beckonings of singer Brittney Slayes, opener “Waking Dream” quickly punches into a colossal wall of sound, setting the stage for the auditory escape that is Abyss. Powerful anthems such as the immense power metal-encapsulated title track “Abyss” and metallic pop-tinged earworm “Through Stars” conjure classic elements while maintaining an entirely fresh, forward-thinking approach. Guitarists Andrew Kingsley and Grant Truesdell turn heads with wicked work on stellar tracks such as “Legacy” (fans of artists like Devin Townsend and Astronoid, take note), while Slayes showcases her incredible vocal diversity and range on mighty epics like “Return To Me” and “The Wind That Shapes The Land”. Drummer Scott Buchanan makes technical strides on burners “Soulbound” and “Faster Than Light” – setting breakneck twists and turns ablaze with his bandmates. UNLEASH THE ARCHERS rounds the edge of Abyss with throwback-hued “Carry The Flame”, and wraps up with the soaring, rewarding concept closer “Afterlife”.

Abyss was once again engineered, mixed and mastered by Jacob Hansen of Hansen Studios in Denmark (Volbeat, Delain, Amaranthe), with production by guitarist Andrew Kingsley. Additionally, transcendent closer track “Afterlife” features orchestration contributions from Francesco Ferrini of Italian symphonic death metal machine Fleshgod Apocalypse. Fans will notice that, unlike on Apex, Abyss incorporates a weighty dose of synth in the mix, and for the first time ever, all tracks were written on seven strings – adding to the massive expanse of the album’s sound as it explores the celestial realm.