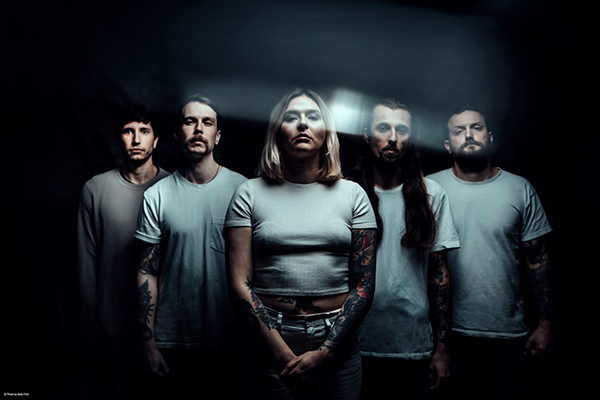 VENOM PRISON releases their new visualizer video for the song “Comfort of Complicity” off the band’s newest full-length, Erebos, out today.

The video was filmed by singer Larissa Stupar and is available to view, HERE.

“’Comfort of Complicity” is a song about the European and American immigration systems and the way they break families apart and criminalise vulnerable people for simply wanting to give a better life for their families.

Musically this song goes through many sounds and emotions and making it as one piece was a challenge. The song wanted to sound like a journey going through aggression to a more major key moment with some form of hope,” states VENOM PRISON bout the song and video.

VENOM PRISON adds about Erebos, “We are extremely proud to have our 3rd full length, ‘Erebos’, finally out in the world. Bringing VENOM PRISON forward on this release we’ve explored new avenues and added more depth and layers to our sound which listeners will find a new experience, ‘Erebos’ is full of surprises at the least to say.

It truly touches on social issues as expected but this time it’s personal – more emotion and attachment than ever before, anger with compassion. Balancing the darkness with light and showing a truer side to what really haunts through sound and words.

Working with Scott Atkins on this record has been an absolute pleasure and is really the fulfilment plus more of what we had initially hoped to do when putting this record together. Thank you Eliran Kantor for continuously creating the incredible aesthetic and atmosphere to our artwork expressing the sound perfectly in imagery.

Massive thank you to Century Media for all their passion and contribution. For anyone that has checked the singles, pre ordered, shouted about, that’s incredible, thank you.”

VENOM PRISON has carved an uncompromising space for themselves over the course of two full-length albums, Animus (2016) and Samsara (2019), and with 2020’s Primeval, which reinvigorated the band’s earlier EP’s with two new tracks.

What began as an explosive collaboration between Russian-born vocalist Larissa Stupar and guitarist Ash Gray (with the line-up rounded out by guitarist Ben Thomas, bassist Mike Jefferies and drummer Joe Bills) has exploded into a force to be reckoned with as vitriolic and outspoken lyrically as they are musically.