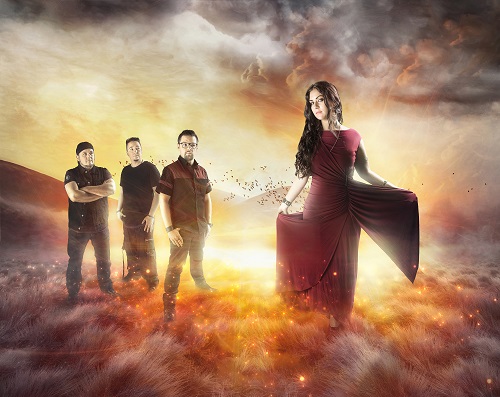 VISIONATICA: The Symphonic Metal band pays tribute to the Sinti and Roma murdered in Auschwitz with their new musicvideo “To The Fallen Roma”

The German Female Fronted Symphonic Metal band VISIONATICA is back with their fourth music video and concerns itself with a serious part of German history. In “To The Fallen Roma” from the current album “Enigma Fire” vocalist Tamara Amedov pays tribute to the Sinti and Roma who died in Auschwitz, also to counteract prejudices against these two ethnic groups. VISIONATICA are supported by Tamara’s Macedonian relatives, who provide the song that certain something with folkloric chants. The music video, again produced in collaboration with Andy Pilkington of Very Metal Art (Orden Ogan, Saxon, Nevaria) and accompanied by an intense band performance filmed by Grasser Production, illustrates the serious theme of the song with haunting and thought-provoking images from the concentration camps: https://youtu.be/SamasQEInsg

Tamara Amedov explains her reasons for this unusually serious music video with the following statement: «”To The Fallen Roma” is dedicated with deep compassion and from the bottom of my heart to the Sinti and Roma who died in Auschwitz. With this song we want to help to clear up false prejudices and contribute to international understanding. They were humans who were treated inhumanely and only because of their ethnic origin. I would just like to make a small contribution to redress this distorted picture.»

VISIONATICA’s latest Symphonic Metal album “Enigma Fire” has been released on July 12th, 2019 through Frontiers Music Srl. With the already released three singles along with music and lyric videos, such as the mystical “The Pharaoh“, the encouraging “Fear” and the heroic female epic of antiquity “Roxana The Great“, VISIONATICA have aroused interest in their new masterpiece and they continue to ride the wave of success which is shown not least by the great reactions from all over the world. The German band around front lady Tamara Amedov, guitarist Manuel Buhl, bass player Tim Zahn and drummer Gerhard Spanner leaves nothing to chance and continues its clear musical vision purposefully. With their first video single “She Wolf” from their debut album “Force Of Luna”, which was released through Dr. Music Records, VISIONATICA has achieved a real hit, which is still heard umpteen times on Spotify as well as YouTube. Altogether, the songs from their two albums have now reached over 2.1 million plays on Spotify alone! Together with their experienced team consisting of Timon Seidl, who did the recordings in the Red Audio Studio, and Olaf Reitmeier (Avantasia, Kamelot, Oversense) of the Gate Studio, who was again responsible for mixing and mastering, the new album proves that the four musicians are not simply resting on their laurels. Bombastic orchestral arrangements paired with the usual hard guitars, in combination with new oriental elements and Balkan influences, create a vast variety during the nine songs. Not only for fans of bands such as Within Temptation, Nightwish, Delain or Xandria, this band is highly recommended! Get ready for a breathtaking sound journey. VISIONATICA’s masterpiece “Enigma Fire” is available at the following shops: Frontiers | Amazon | Napalm Records | MetalMailorder.com | Hot Shot Records | Poponaut | Saturn | Media Markt | Buecher.de | Weltbild | JPC | WOM | BOL | Grooves | ExLibris | CeDe | Bilbo Records | Fnac | AudioGlobe | Ibs.it | Bengans | Ginza | iMusic.dk | iTunes | Google Play | Apple Music | Amazon Music | Spotify | Apple Music | Deezer | Tidal | Qobuz