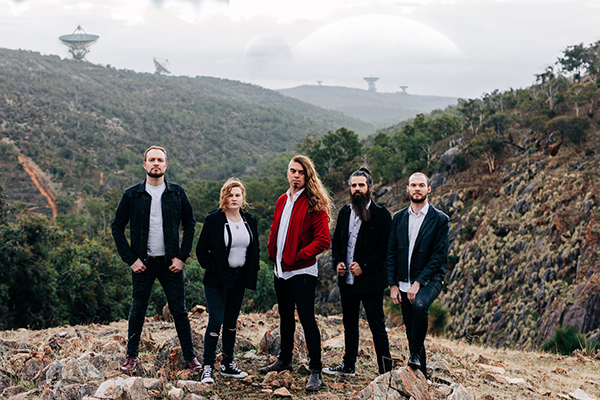 A cosmic live performance spanning over 20 years and seven albums, inspired by the fans.

Electro Prog Metal titans Voyager will transmit to the universe a special edition online show direct from Perth, Western Australia this September. Following the success of their debut online show that served fans during the first lockdown, Voyager have now expanded their horizons and announced a unique once in a lifetime performance that spans the band’s extensive career.

‘A Voyage Through Time’ sees Perth’s premiere Progressive Metal outfit Voyager present a one of a kind visual and aural performance that outlines the progression of their musical career. An online live experience with full production, a journey across two decades and seven albums with a fan-voted set list, seeks to explore a new and enhanced approach to the band’s live show serving to grab the attention of both their Australian and international fan base, and as a tribute to the songs that have stayed with fans over time.

The show will air on Sunday September 5th, a date which celebrates the Voyager 1 Spacecraft that was launched by NASA.

This is a Voyage that won’t be forgotten. Save the date.

More details on merchandise, VIP bundles and set list to be announced in due course.

Danny Estrin, vocals and keytar, says this about the show

“Voyager will return to the world stage in full force this September for a cosmic show that spans the entirety of our career. Inspired by a fan curated set list, and songs that we haven’t performed in years, we’re plotting an insane live production that displays the progression of our music over the course of two decades and seven albums. We’re here to deliver a show that is truly A Voyage Through Time. Expect Voyager live like you have never seen us before.”

If there is one word to describe VOYAGER’s most current form, it is colourful. After years of evolution and amassing worldwide influences that mould the Perth quintet’s unique sound, VOYAGER have truly come into their own in recent years, crafting a path of success both on and off stage. The genre-transfiguring act blend new-romantic and 80’s infused vocals, keytar solos, technical yet melodic fretwork, groovy bass and bombastic drumming efforts. All of which make VOYAGER the pop/prog/power/rock/metal force that they are renowned as today.

The band’s most recent album ‘Colours in the Sun’ was  the winner of The Independent Music Award in the Rock/Hard Rock Album category. The record was released in November of 2019 and landed a coveted #1 placement on the Australian Independent Albums chart! ‘Colours in the Sun’ also debuted at #7 on Independent Label Albums as well as #27 on Official iTunes Australia. The song ‘Runaway’ saw them shortlisted for Eurovision, Australia Decides.

Expect new music from Voyager in 2021.