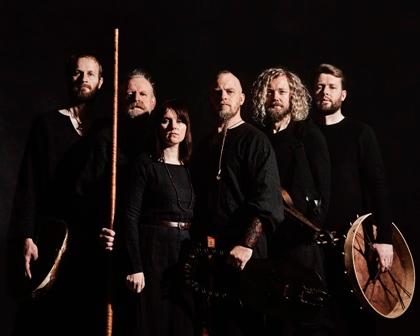 Traditional Norwegian folk outfit WARDRUNA have transcended genres, cultures and language barriers worldwide with their musical ode to ancient Nordic traditions with a #1Billboard World Music album (2016), massive music contributions to the History Channel’s “Vikings” and a 2018 sold-out headlining show at Red Rocks Amphitheatre in Colorado. The band will continue to integrate the past in a modern way with their upcoming fifth full-length album KVITRAVN due June 5 via BY NORSE MUSIC (U.S.) and SONY MUSIC / COLUMBIA RECORDS (worldwide excl. U.S.).
Following the release of the album’s debut single “Grá“-translating to ‘grey’ in English-and its transcendent music video which can be seen here, founder/composer EINAR SELVIK (ex-Gorgoroth) has revealed KVITRAVN‘s track listing along with translations for each of the track’s titles.
“For those who want to search deeper into our songs, the upcoming album will contain complete lyrics along with English translations,” reveals EINAR. “When revealing the track list, it also makes sense to show the translations of the titles, so one potentially gets a better idea of the album’s content.”

KVITRAVN‘s track listing with translations is as follows:

EINAR adds: “The power of words, poetry and abstract thinking as well as the ability to master them in various forms was highly regarded in the oral societies of the past. It is a trait that we feel should not be forgotten. Our lyrics are therefore an important layer to the music“.

“Whether the given song is about traditions, spirituality, philosophy or other esoteric subjects, there should always be a potential of learning something,” he explains. “Knowledge, yet knowledge that is not served as overly explained truths, but rather in abstract images and hints that inspire the listener to seek their own understanding–much like the way Old Norse poetry deals with esoteric matters“.