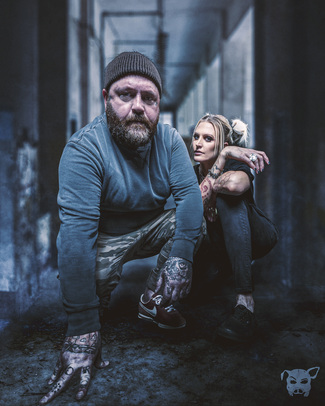 WE ARE PIGS: new band member

We Are PIGS is shaking things up in 2022 with the announcement of Terry Corso (5x worldwide Platinum, Grammy-nominated act Alien Ant Farm and Powerman 5000) as an official member of the troupe that’s hell bent on reviving nu metal.

Led by noted producer-songwriter-artist Esjay Jones, the project aims to bring back the raw integrity of the early 2000s genre coupled with modern trap beats and programming for a fresh version 2.0.

That thrilling combination is heard on the new track “Anorectic,” alongside a brand-new video, helmed by Nobel Savage Cinema, released today and premiered via Revolver who called the track a “rager.”

Corso – who contributes guitar and backing vocals alongside songwriting and programming to the project – first met Jones when she was hired to contribute co-writing duties to an Alien Ant Farm track and the two quickly worked on the very first We Are PIGS release, a cover of Slipknot’s “Duality” in May 2020.

While Alien Ant Farm are on hiatus, Corso looks forward to being part of We Are PIGS and says, “Esjay and I finish each other’s ideas and she’s one of the most motivational and complimentary artists to work with. She’s good at getting the best out of you and has always had faith in my art, which means a lot to me.”

Adding his thoughts on “Anorectic,”Corso says, “We are super excited about finally getting around to releasing an original song we wrote together and I think it’s a great representation of the band. We are trying to make this nu metal revival with contemporary aspects, which is great since I was part of the nu metal movement when it happened with Alien Ant Farm. I think people are hungry for that kind of music again.”

The video for “Anorectic,” filmed at the legendary Nude Bowl in Palm Springs, California, also aims to bring back the early 2000s nostalgia with a “live performance”-style video that captures the raw, erratic, high-energy feeling of the scene and is a great introduction to what We Are PIGS are planning to bring live along with drummer Edo Tancredi.

More details will be announced soon about the project’s first-ever tour dates and a debut EP release.

Characterized by a pig-masked front woman, We Are PIGS was started by Esjay Jones as an alt metal hybrid project combining brutal riffs, brazen screams and ethereal melodies with strong lyrical messages. After debuting with a cover of Slipknot’s “Duality” in 2020, followed by original single “Pulse Queen” in early 2021, We Are PIGS has found an incredible following and support through playlist placements on Spotify, Amazon Music and Apple Music.

Recent releases have included “Kids” with Brian “Head” Welch of Korn and Love And Death as well as “MOOT” featuring KITTIE’s Morgan Lander and “Blood Diamond,” a collaboration with M.O.B. In addition, Jones has worked behind the scenes as a sought-after producer for acts including Grey Daze (Chester Bennington) and a soon-to-be-released collaboration with Billy Corgan.

About We Are PIGS/Esjay Jones

We Are PIGS is the alt metal hybrid with brutal riffs, brazen screams and ethereal melodies created by South African born producer / songwriter / artist Esjay Jones. In the summer of 2020, We Are PIGS made its debut with a cover of Slipknot’s “Duality” and the first original single “Pulse Queen” followed at the tail end of the year that has boasted 15 additions to editorial playlists between Spotify, Amazon Music and Apple Music.

Esjay has also worked with Sean Kingston, Jeffree Star, Olivia Holt, Escape The Fate, Mystery Skulls with Nile Rodgers and Brandy, Chester Rushing (Stranger Things), Alien Ant Farm, and many others. Esjay has had over a decade of success in the music industry: during the first part, she cemented herself as one of South Africa’s top rock vocalists fronting Durban-based band Stealing Love Jones.

The band achieved mainstream success with four #1 Singles, as well as sharing the stage with major international acts like One Republic, Fall Out Boy, Violent Femmes, Seether, Jimmy Eat World, and many more.