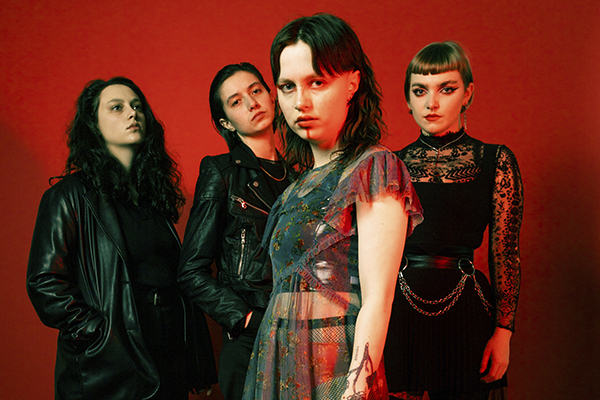 After a successful 2021 including signing to Sony’s Music For Nations, and releasing its debut EP Reincarnate to critical acclaim, Witch Fever returns with new single ‘Blessed Be Thy’ which was produced by Pigs x7’s Sam Grant at Blank Studios in Newcastle.

Witch Fever is well versed in using religious thematic material to develop its lyricality, and ‘Blessed Be Thy’ sees Amy Walpole tailor language, cadence, and rhythm of a traditional hymn to deliver her own message, “blessed be thy shame / It makes us remember truth / A slow decline, the cursed divine / A place to hang your youth”.

Bassist Alex Thompson says of the track, “it just goes heavy”, as it boasts a crunchy wall of noise akin to bands like Show Me The Body and Gilla Band.

Watch the video for ‘Blessed Be Thy’ HERE

Alex adds, “it was literally the last song we wrote before we went into the studio but came together really quickly. I think it still has an essence of some of our older material, so it’s a good way to bridge the gap.”

Gaining praise from The Guardian, Rough Trade, CLASH, NME, The Observer, Gigwise, BBC Radio 1, Kerrang! Magazine, Fred Perry, and BBC6 Music to name a few, as well as a tour with IDLES, new single ‘Blessed Be Thy’ will serve as a prelude of things to come for the Manchester four piece.

The band has also been nominated for Best UK Breakthrough Artist at the Heavy Music Awards, with voting closing on 22nd April. Vote HERE.