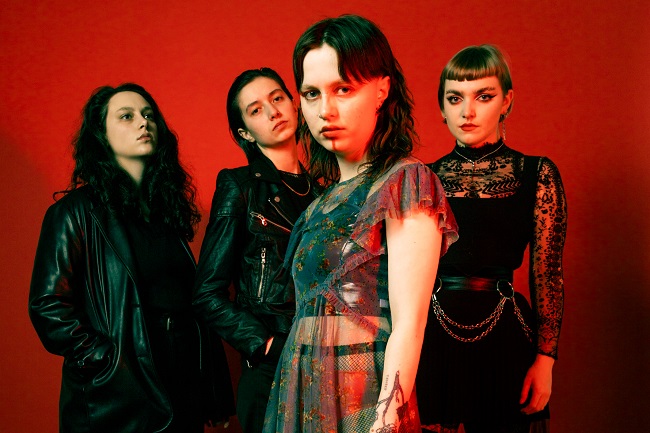 Debut EP Reincarnate out today
Via Sony’s Music For Nations

Includes tracks ‘Reincarnate’, ‘In The Resurrect’, and ‘In Birth’

Announced to perform at 2000 Trees

Forming four years ago after meeting through mutual friends, Manchester’s Witch Fever have gone from strength to strength since their beginning. Signing to Sony’s Music For Nations, supporting Bob Vylan in an almost sold-out tour, and today they release their long-awaited debut EP Reincarnate digitally, with the 12” vinyl out 3rd December.

Including singles ‘In The Resurrect’ (watch here), ‘In Birth’ (watch here), and title track ‘Reincarnate’ (watch here), the four-piece have had a flood of praise from the likes of BBC Radio 1’s Dan P Carter, The Guardian, The Forty-Five, NME, CLASH, Kerrang! Magazine, Rough Trade, BBC6 Music’ Steve Lamacq, and many more, with Gigwise saying “This is a band with such clear talent”.

“There’s a big emphasis on female empowerment and female anger,” says bassist Alex of the message raging behind the band’s music. “It’s about celebrating yourself and self-expression. Not being stifled and held back.”

On the EP, singer Amy says:

“This is the first time we’ll be releasing something longer than a single so it’s very exciting for us! The EP doesn’t really have a singular meaning behind it, it’s a mix of what our favourite songs to date were!

Some of them we wrote and finished during the lockdown and some are a few years old. The overall lyrical content is a cross between biblical and horror imagery as a way to explore empowerment, catharsis and anger. It’s about owning my sexuality, my body and channelling my anger through music.

With every piece of music we write we want to break the boundaries of a typical ‘Witch Fever’ song and push ourselves as musicians to keep evolving and getting out of our comfort zones! The more brutal the better!”

Witch Fever have also just been announced for 2000 Trees which will be headlined by IDLES (who they will be supporting this January at O2 Academy Brixton), Thrice who will perform album Vheissu in full, and Jimmy Eat World.

To celebrate the release of EP Reincarnate on vinyl, they will be performing in store at Rough Trade East on 4th December, with a signing.

Get tickets here via DICE.