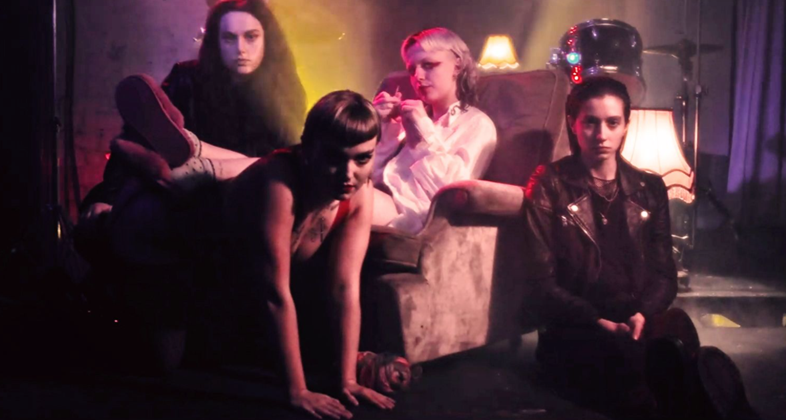 Formed four years ago through mutual friends, the band went through several personnel changes before arriving at the current line-up. In 2019, bassist Alex, drummer Annabelle, vocalist Amy and guitarist Alisha released the rabid single ‘Berzerk(h)er’, followed by an eerie follow-up in ‘The Hallow’ via Venn Records, which the band worked on with Creation Records founder Alan McGee, the Manchester scene legend who launched the careers of My Bloody Valentine, Oasis and Primal Scream.

Today, the doom punk quartet share new single ‘Reincarnate’, an anthem of post-breakup independence, set to Sabbath-esque graveyard noise, alongside a seductive video that explores womxn’s desires and fetishes. ‘Reincarnate’ is just a taste of what’s to come from Witch Fever, with further tracks to follow over the coming months, all recorded over a period of days with producer Jaime Gomez Arellano (Mayhem, Ulver, Ghost) in 2020.

Witch Fever have also announced that they have signed to Music For Nations, part of Sony Music.

“We’re not here to say, ‘This is what you need to do with your life’, we just want to make angry music and make sure we don’t take any shit from people who give us shit,” says singer Amy.

“There’s a big emphasis on female empowerment and female anger,” adds bassist Alex on the message raging behind the band’s music – “It’s about celebrating yourself and self-expression. Not being stifled and held back.”

“There’s something about playing heavier music that feels so empowering,” says guitarist Alisha. “We all have completely different music tastes and inspirations, but that’s what makes our sound so unique.”

“It’s important for us to do things our own way and represent ourselves as we wish, regardless of outside opinion,” adds drummer Annabelle. “We represent an honest voice about breaking out of the indoctrination in our society and all oppressive institutions.”

Witch Fever’s modern punk should put them firmly on the radar of fans of Bikini Kill, IDLES, Dream Wife, Savages, and Show Me The Body, bands who are pushing noisily for social change. And in 2021, the band plan to take their new music and the white-hot energy of their relentless live show on the road. They’ll be playing the sold-out Truck Festival in July, and in September playing Leeds’ All-Dayer A Wave Before A Kick In The Chest, playing Devon’s Burn It Down, and Futurama Festival in Liverpool headlined by Heaven 17, and Peter Hook and The Lights. In 2022 they will be joining IDLES at London’s Brixton Academy, and dates in Europe, as well as supporting Bambara on selected Europe dates.

Tonight, they’ll be giving a live streamed performance for the esteemed Scruff Of The Neck in Manchester from 7.30pm, plus an interview with Abbie McCarthy. Log in here Twitch.tv/scruffoftheneck.

Being named as ones to watch by NME, CLASH, Metro, and more, as well as championed by Fred Perry, Vans and even Orange Amps, Witch Fever are a band you’ll want to keep a close eye on.

Watch the video for ‘Reincarnate’ HERE.

Tickets can be bought HERE