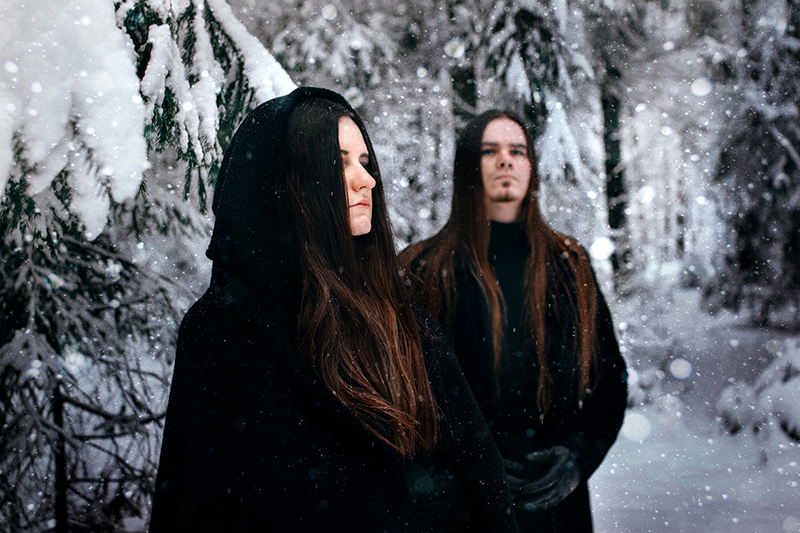 The material for the debut album has been accumulating over the years. The official year of the creation of the project can be considered 2020, when Belarusian composer and mastermind of the project Olga Kann invited compatriot vocalist Alex Rabets and Greek guitarist/sound engineer Koliopanos Filippos to participate in the recording the debut full-length.

“Over Distant Shores” is the fourth track from the upcoming album. In this song, a fearless but wounded warrior fights in his main battle – for his life, being on his own kind of esoteric journey on the other side of consciousness. On his way he will meet the mighty mountains, cold rocks and distant shores, but will his spirit be able to return to the world of the living?

“The Endless Journey” is an epic atmospheric black metal story in 5 acts. The story of a warrior about the merciless battles, his difficult struggle and longing for home’s shores. It’s a gloomy narration about the esoterical experiencing death and return from other side. A story of a bitter defeat and emptiness inside, but with some hope yet. Together with the hero, we will be transported to the worlds of beautiful mountain ranges, gloomy shores and distant epic fields.

Under the cover of a magical starry night, surrounded by wraiths and lurking enemies we will find a guiding star. The lonely wanderer returns home… But it’s a journey that will never end. Album will be released via Naturmacht Productions on August 20, 2021. Physical release will be on September 10, 2021.

“The Endless Journey” mixed & mastered by Filippos Koliopanos (Ocean of Grief, On Thorns I lay). Visual design for album made by Olga Kann. The album contains 5 epic atmospheric black metal songs with a huge amount of symphonic and folk arrangements, battle samples, along with the great varieties of furious vocals.

Tracklist:
1. Through The Misty Mountains
2. Wraiths Surround Us All
3. Mournful Story Never Ends
4. Over Distant Shores (single)
5. Death Was Always Near