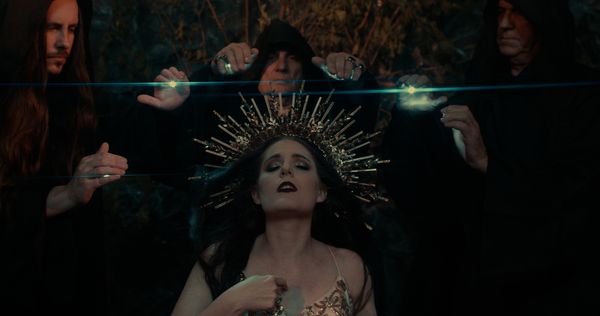 Worhol is a female fronted symphonic rock band out of Texas, but some mistake them for a European band because of their overall sound and appearance. The band delivers a unique style of dark, theatrical, orchestral music that showcases Ashley Worhol’s dynamic mellifluous voice.

The band has released the official music video for their single “Speak to Me.” The video was shot by the film company M5 Entertainment in collaboration with Darkstar TV and was directed by Christopher Maggard.

“Speak To Me” was written during a point in my life where I felt completely abandoned and lost. I have always been strong in my beliefs but at this point I felt like I was speaking and yet nothing was responding. I went through an emotional journey where I thought I had done something wrong which is what led to the feeling of abandonment.

This song is a direct conversation between me and God and I’m begging for him to speak to me. While writing this song I finally heard and felt again and felt the need to sign this song because at that very moment words were not needed to be spoken. The guys play a very important role in this video.

They represent my guardians both in the ethereal world and here on Earth, my protectors you might say. But the beauty about this song however is that it doesn’t matter what or who you believe in, your race or gender, because in life we are never guaranteed happiness but each and every one of us will at some point experience pain and through that pain we are all one. We all are living this journey we call life and we are way more connected than we realize” says Ashley Worhol.

Worhol formed in 2013 when lead singer Ashley Worhol and her father Larry Worhol decided they wanted to follow their dream together as a team. Both having degrees in music and a classical background, they knew that they had the knowledge it would take in writing their style of music.

Worhol’s music can be best described as symphonic and theatrical with Larry being the guitarist as well as the orchestral composer and Ashley being professionally trained as an opera singer. Since Ashley and Larry are kin to Andy Warhol they decided to keep the band name in the family.

Once Worhol was set they reached out and found the rest of the members of the band; Craig Malinowski (bassist) and Marty Naul (drummer).

Worhol is based in the USA but is known globally. They released their first album, The Awakening back in 2015 through Imminence Records and Wormhole Death publishing (europe). However, back in 2017 Worhol decided to remain an independent artist.

Worhol recorded The Awakening with John Lecompt, former guitarist of Evanescence. Since their first album, Worhol has been touring both nationally and internationally. Their music has appeared in major magazines such as Billboard, Revolver and more!

They have won several awards and in 2019 their track, “The Darkness” was featured in the award winning horror film, Rosa Leigh. In 2020, both Ashley and her father released their arrangement of “Amazing Grace- My Lord, My God” while showcasing their acting skills in their short film, Amazing Grace.

This was just the beginning for composing opportunities because in 2021, Ashley scored the featured horror film, Terror Trips and recently an article in Fangoria Magazine was published in regards to the films 2022 release. Currently planned for 2022, Ashley will be scoring another featured horror film called, Root. Worhol has a lot of plans for 2022 and are composing pieces for upcoming feature films while also finishing their EP, due to release winter of 2022.

In late January of 2022 Worhol is set to release their single, “Speak to Me” which is now being accepted for music video awards worldwide. Worhol will also be headlining LEAF Fest later this year in Llano, Tx. and has a major surprise towards the end of the year with a once in a lifetime concert opportunity.

Listen to the album, The Awakening here: