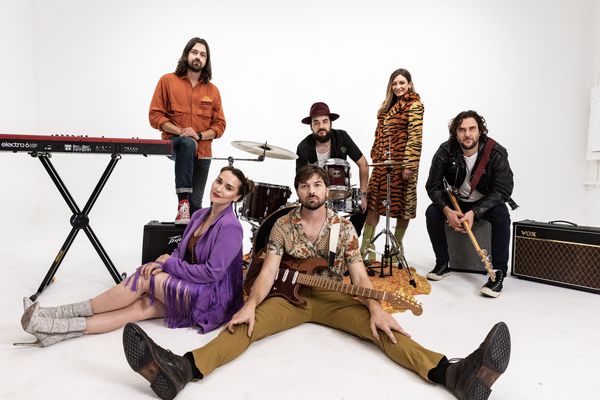 The album follows on the heels of the album’s lead single, “If It Happened 2 U” as well as “The Only Naked Guy at the Party“. Yony’s brand new LP More Truth in Fiction is available wherever music is sold or streamed via A Fingerpants Production.

“More Truth in Fiction explores two main themes: social justice and mental health. Sound familiar? A lot of what’s written was a direct response to the events of 2020. Our message has always been the same. Everybody deserves to be loved, except for the people that don’t. This time we just gave it more teeth.

Non-fiction takes an objective reality witnessed from countless perspectives and filters it through the mind of a single author or publisher.

Fiction does the opposite; turning a single perspective into an objective reality. It’s like an event that lasts forever. Every time a person interacts with a work of fiction, their subjective experience is authentic and indisputable. No arguments over what really happened. There’s comfort in that. There’s autonomy.

These songs speak to that kind of individual truth. Not subjectivity in art, but the idea that there is no wrong way to exist. So many people are struggling to be seen and heard, and I think a lot of that stems from being taught that you have to fit into some kind of framework. Nothing does.”

The idea of Yony started in 2017 when songwriter Mike Cionni released a collection of 8 songs (Yony: The Album) that he hoped might send his show in a new direction. He’d thrown a lot of mud at the wall, but nothing stuck. This 6-piece variety show promised something different.

With the help of his sister, Meghann Cionni, and Jim Berkenkamp, they assembled a group, which immediately fell apart. Two years later, with a new Automatic Thoughts EP, Cionni’s newest batch of songs caught the ear of keyboardist Alex Zudin, and the two became friends.

Over the next couple years, Mike enlisted longtime friends Michelle Maret and Dustin Hackworth to play some shows, just in time for a new collection of songs…and a two-year quarantine.

Like many, the first days of lockdown sent Mike into a frenzy of productivity, and by the summer of 2020, he demoed a collection of songs that would become More Truth in Fiction.

The songs were a safe space to vent, and echoed the frustration Mike felt watching what felt like the world falling apart on his iPhone. Within the guidelines of COVID-19 mandates, Mike, Dustin Hackworth, and Alex Zudin started meeting at their rehearsal space in North Hollywood.

There they shedded the songs between recording sessions at Sir Tiger Studio in Culver City and Mike’s Highland Park Apartment. The recordings were mixed via email by artist-producers Norbert Lukacs (Johannes Räihä, TIMBERT) and Jules de Gasperis (KUNZITE, James Supercave), and mastered by Evren Goknar (Capitol Records, The Voice).

01.) Leave Our Heads Behind