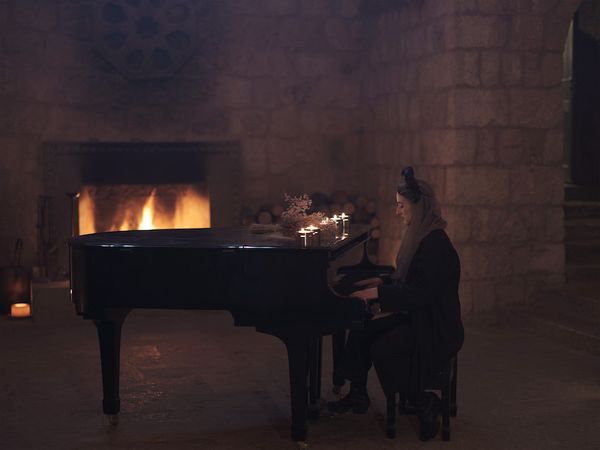 In the wake of her acclaimed sixth studio album, Arkhon, out now on Sacred Bones Records, Zola Jesus releases Alive in Cappadocia..

The stunning performance video celebrates the dominance and dynamism of Zola Jesus’s powerful voice with spellbinding live performances of “Desire” and “Into The Wild” from her new album as well as stand out classics “Skin” and “Siphon.” The video is available for streaming and download now on select platforms and the audio will be available on DSPs this Friday, November 18th.

What you hear is Nika’s commanding voice augmented only by the natural echoes and sonics of the space itself; Danilova alone, at the piano without any additional embellishments.

Created while in Turkey on the video shoot for “Lost,” director Mu Tunc and Zola Jesus shot Alive in Cappadocia in the ancient chapel, historically known as Bezirhane, the remains of which were unearthed during construction of the Argos Hotel. Initially used to produce linseed oil, over its history Bezirhane also served as a monastery frequented by monks, and as a caravansary frequented by Silk Road travelers.

Chosen for its historical richness, its topography, and its acoustics, this stunning space is as awe-inspiring as the performance itself.

“While I was in Cappadocia filming my music video for ‘Lost,’ Mu Tunc and I took over this beautiful former monastery on the grounds of Argos to film a rogue concert. Hearing my voice resonate through that ancient space was nothing short of a souvenir I will keep with me forever. Grateful for that moment to be archived in this film.”

Director Mu Tunc adds, “The chapel has such a strong spirit that any sound created inside it resonates differently. When you consider that Nika performed without any kind of professional audio equipment and that it is only  the piano and her own voice that end up conveying such a strong and clear sound it is pretty amazing. The whole experience was magical.”

Zola Jesus will also play two very special shows in Vienna & Berlin later this year, she explains “my shows in Berlin and Vienna will be very special performances with string quartet and solo piano. I’ll also be performing a set of operatic arias for the first time ever. It’s going to be a show unlike anything I’ve ever done. I truly can’t wait to share it with you.”

Alive in Cappadocia tracklist:
1. Desire (from Arkhon)
2. Into The Wild (from Arkhon)
3. Skin (from Conatus)
4. Siphon (from Okovi)

There is a way a voice can cut through the fascia of reality, cleaving through habit into the raw nerve of experience. Nika Roza Danilova, the singer, songwriter, and producer who since 2009 has released music as Zola Jesus, wields a voice that does that.

When you hear it, it is like you are being summoned to a place that’s already wrapped inside you but obscured from conscious experience. This place has been buried because it tends to hold pain, but it’s also a gift, because once it’s opened, once you’re inside of it,it can show you the truth. Zola Jesus’s new album, Arkhon, finds new ways of loosing this submerged, stalled pain.

Arkhon is out now available to order here on multiple limited edition LP variants through Sacred Bones, Bandcamp and various independent retailers, as well as on CD and cassette.