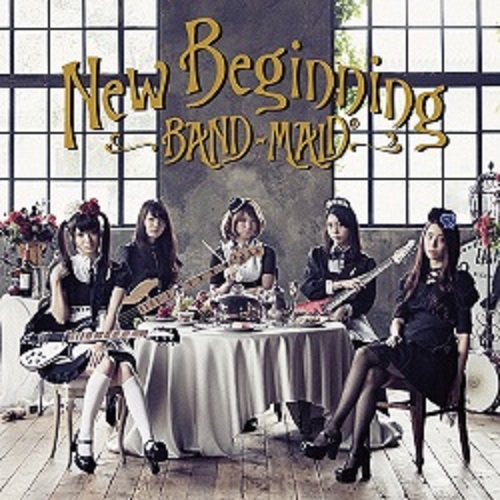 Japanese artists are somewhat isolated from their international fans. While music videos are available for us to be impressed, it is sometimes difficult for us to buy Japanese music. BAND-MAID have been together since 2013 and play a drums and guitar driven hard rock style. BAND-MAID have a fairly clean sound with minimal effects applied to instruments or voice. They have a solid rhythm section, effortless guitar riffing/soloing, and confident vocals;  this is a band that knows how to play. Listening to them I am reminded of artists like Lenny Kravitz, Disturbed and Skunk Anansie. Band-Maid was founded by MIKU who once worked in a “maid cafe” – a Japanese dining destination that is said to be influenced by cosplay, anime and video games. It sounds like fun, but with the music found on “New Beginning” we can be thankful they gave up their day jobs.
There are nine songs on the album for a total playtime just over 30 minutes. “Thrill” starts things off with an great introduction to everything BAND-MAID. There is a feature spot in the song for each of the band members, including a bass guitar solo. Even though all the song titles are in English, most of the vocals are Japanese. However, most of the songs have a least a few English lines. This combination works well, as an exotic element in the music, and for sing-along moments that will help the album appeal to a broader audience. Other songs with music videos are “Don’t Let Me Down” and “Real Existence”. Both of them continue the excellence of “Thrill” and will probably be the easiest way for international fans to listen to the band.  With those three songs you will have a good idea of the sound of the whole album. The song writing is consistent, there are a few standout tracks including the songs selected for music videos, but all the songs on the album are tracks that I want to continue hearing.
BAND-MAID have a great hard rocking energy, and just like the song says they, “Don’t Apply the Brake”. Hopefully there will be a full international release of this album because it rocks. The musicianship, Japanese/English lyrics, and melodic catchy songwriting combine to make “New Beginning” a fantastic mini-album that deserves wide acclamation.