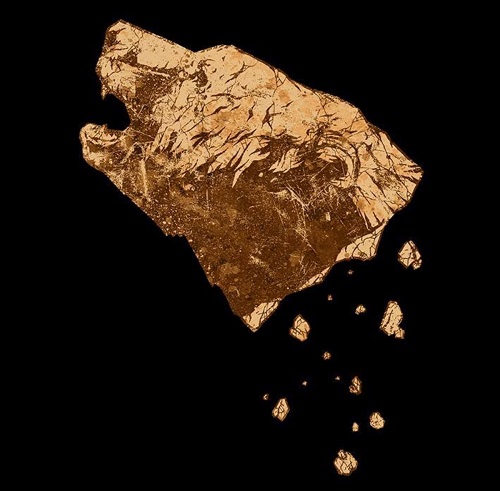 In 2015 Crippled Black Phoenix released “New Dark Age Tour EP“. It opened with an excerpt from the original “Mad Max” movie – “If you’re going to waste the bronze, you gotta do it big”. The EP also included a cover version of Pink Floyd‘s song, “Echoes”. The EP may have been a taste of what would come with “Bronze”. The metallurgic qualities of bronze are noted in the band’s description of the album – a mix of metals coming together to form items of beauty and war. However, the Mad Max quote mentions the album title, and the link to the EP is reinforced with many of the songs on “Bronze” showing more than a little Pink Floyd themed influence. This time around the album opens with a philosophical extract from the movie “Dark Star”: “In the beginning there was darkness and the darkness was without form and void. And in addition to the darkness there was also me. And I moved upon the face of the darkness. And I saw that I was alone”. What follows in the movie is an explosion, what follows here is the opening track “Dead Imperial Bastards” which has the sound of a Vangelis composition. As the track closes the music is mixed into the opening of “Deviant Burials” (and most of the track transitions are mixed seamlessly). After the continuation of the opening track’s darkly atmospheric instrumental, the guitars kick in as a heavy driving rhythm takes over. Vocals make their entrance into the album and the grand experience of “Bronze” is definitely underway. I feel this album should be taken as a whole. Fragmented into songs there is decent music, but taken together there is an ebb and flow which augments each track. If this were played live, a performance of the whole album would be the best way to hear each song. Having said that, each song is a distinct experience. There is a cover version of Joe Walsh‘s “Turn to Stone”. There is the dirge-like ode to the black dog of depression, “Scared and Alone”. It has a female vocal (by Belinda Kordic), features the sad notes of a piano and trumpet, and includes an extended guitar/drums section which sounds like the tones of Mark Knopfler through the opening passages. “Scared and Alone” also has an animated music video – but it is quite unlike everything else on the album, so look further than the video to get a better preview. Or better yet, just buy it and listen to it complete. I don’t expect everyone will love the contemplative exploration of songs on “Bronze”, they might seem too stretched out and perhaps bland. However, from “Dark Star” extracts spread over the album, through walking the black dog, atmospheric ambient moments, to the intense reverie of the band in full voice, there are a lot of elements to love about this album from Crippled Black Phoenix. They have wrought a masterpiece from various elements worthy of being called “Bronze”.