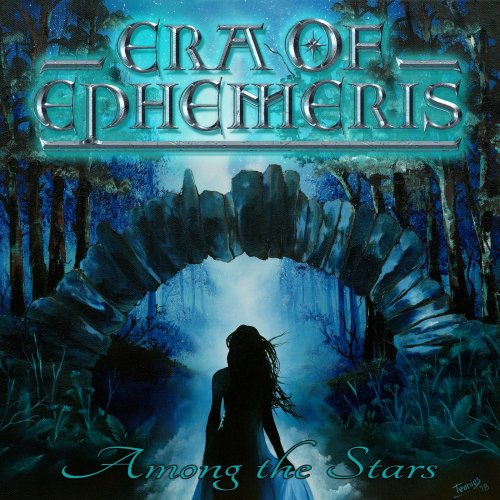 “Among the Stars” is the first album of the Swedish band Era of Ephemeris. This symphonic metal band was formed back in 2017 and it combines symphonic metal with melodic death metal, progressive influences, and 80’s rock. It took me some time to get the right feeling about this album. Let me tell you why. The album opener is the instrumental track “Reflections”. It’s nice to start an album with some kind of intro but this one doesn’t fit with the album. And at the end, it feels a bit like someone turned off the power. “When the Leaf Falls” is the perfect case of how the album sounds, a bit dark with heavy guitars, bass, and drums, so it’s melodic metal at its best. However, it also shows us something I hear throughout the whole album: the music isn’t in balance with the voice of Rossana and consequently, her voice gets overpowered by the layers of instruments which make difficult to hear the lyrics. Some good examples are the tracks “Another Side of the Same World” and “Ancestral Visions”. Unfortunately, it’s a pity because Rossana has a very nice and clear voice and the track “Farewell” is the best example of this. On the other side, the best track of the album is the title track, with its magnificent guitar solo and the deep bass and the drums, it shows what this band is capable of. Along with the last track of the album “Off in the Great Unknown”, the title track gives the impression this to be continued because the journey is just begun. On a last note, it’s just a debut album and the band has set the foot in a nice way. If the band allows me a critic and mind you it’s only my personal opinion, what really lacked in this début was the correct balance between the symphonic metal sections and the melodic death influence. Note please that with I’m not dissuading from recommending this interesting release because they are all great and talented musicians. Nonetheless, I’m sure that “Among the Stars” is just the beginning of a great musical journey.