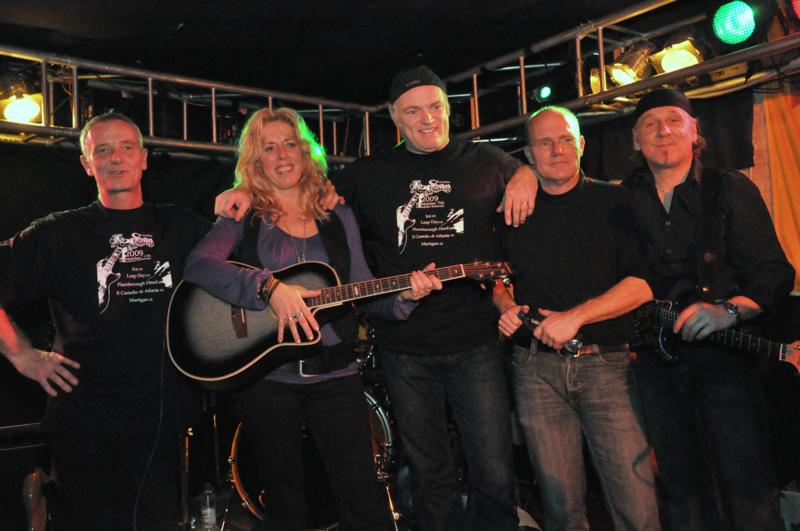 There are some dissonant clarifications to make before progressing to the music contained within “Jumping The Milestone“. Having not heard of Flamborough Head, but noting the English-sounding name, I found the location refers to a piece of the Yorkshire coast (definitely located in England). This leads one to imagine the band naming themselves after the place where they formed or perhaps call home. As is so often the case, these first thoughts are incorrect, the band originates in the Netherlands from which Flamborough Head would be accessible by a relatively short, but not direct, sea journey.

The second item to discuss is the “milestone” after which the album is named. There is a photo of a milestone in the album booklet of a real-world milestone located in India on National Highway 1. It would be a reasonable guess to say it indicates 22 kilometers to Leh. An interesting milestone, similar in style to the milestone on the album cover, and slightly similar to the “2022” text inscribed on the milestone decorating the album cover. In truth, Flamborough Head appears to be celebrating thirty years since the band’s formation with the album. No small accomplishment for any musical group.

The last item of dissonance to consider is related to the lyrical content of the album. It is worthwhile delving into the music before approaching the lyrics. The band is definitely camped within the progressive music genre with pure female vocals ringing throughout.  Acoustic elements provide a folkish characteristic with flute and guitar making regular contributions. Overall, the impression is of a group similar to bands like The Reasoning or Blackmore’s Night.

Musically the album is a relaxed delight throughout, in total the six songs provide just under one hour of content in full. Listening to the vocals, one does sink into the songs though there were a few lines for which the vocal seemed to be forced, however that effect is probably intended when one considers the lyrical content. This is the last of the discordant items mentioned previously, for an album referring to the milestone of thirty years of existence, the words are somber, relating to a variety of mental states including therapy, depression, PTSD, OCD, poor self-esteem, suicide, and a nihilist world view. The storytelling in the lyrics is broad and in resolution, the solutions seem naïve at times. I do not believe it is intended when considering the tragic ends of other tracks. However, the promise of a new day and a return of hope do appear awkward, though well-intended. Reading the lyrics there is a difference between what works well and the poorly delivered. Writing within the framework of personal experience allows the lyrical content to shine, however, when the lyrics provide advice for whoever the song may have been written, to or the listener, it becomes awkward at best.

Personal experience storytelling is used well in songs: “The Garden Shed”,  “Start of a Nightmare”, and “Walls Of Words / Signs Misread”. The final two provide these samples:

“Why does it hurt so bad, how come she’s still confused / It’s getting under her skin, she feels it’s time to begin / to pick up the pieces and pay / But when push comes to shove, it’s never enough / This nightmare’s here to stay”

“Disaster struck, no warning signs, you’d led us all astray / A gruesome deed, act of despair, you finally had your way / How could we be so stubborn and ignore what’s in your head / We should have been more critical aware of signs misread”.

In contrast, here are some advice examples from “Jumping the Milestone” and “Fear of Failure” respectively. They are more likely to negatively trigger a person dealing with mental health issues:

“Get out of old patterns and accept the way you are / Enjoy the present, don’t look back and put an end to this strife / Better bend ’cause if you break, you won’t get very far”

Overall, this is an album with intense stories and masterful execution, in many ways it reminds me of an artwork celebrating an extra decade of existence this year – the 1982 animated film with a soundtrack by America called “The Last Unicorn”. For listeners dealing with mental health issues the lyrical content is worth considering, there is a possibility here of help or harm to consider. Celebrate the longevity of Flamborough Head, and take care.