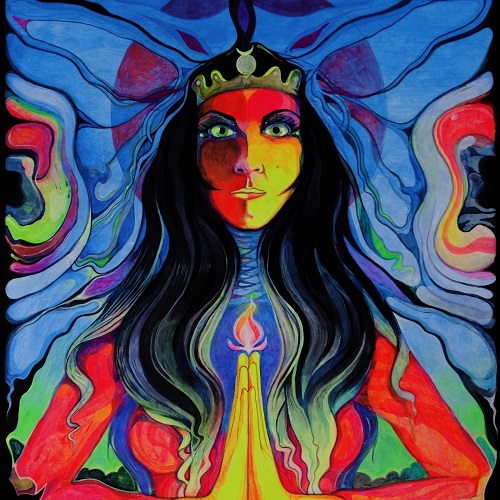 The bands Ipso Facto and Purson were the previous musical lives of Rosalie Cunningham. This time around she has made an album under the banner of her own name. The album continues the modern-retro psychedelic themes of the prior musical excursions. My first impressions of her self-titled début were of fascinating compositions which, if they were able to look in a mirror, would reflect on Queen creating an album based loosely around The Beatles song “Being For the Benefit of Mr. Kite”.

After a few listens the first impressions hold, though I would add to them some of the variety show that is The Beatles‘s white album. Is this worth your time? Perhaps the music video for “Ride On My Bike” (watch the video here) will help you decide. There are also a few lyric videos which I like, as they help to appreciate the cleverness of the lyrics. Have a look at the lyric video for “Fuck Love” (watch the video here), it is an excellent demonstration of the greatness in the album. However, it is the variety on the album which is most noticeable. The experimentation is on display, for me it pays off in the strong storytelling of “Fuck Love” and wistfully presented “Butterflies”. These tracks alone are worth the price of admission, but the conceptual whole is difficult to grasp and perhaps a few of the tracks could have been pushed further. Picture yourself watching a variety performance; give another hand for Madame Cunningham and her bicycle acrobatics, Rosalie the juggler is next, but now we have the bearded woman… But I suppose that is in keeping with my first impressions regarding Mr. Kite – the inspiration for that song was the list of acts on a circus poster. “A Yarn From A Wheel”, the final track, is almost thirteen minutes long and becomes a musical stream of consciousness. Overall her new album is always entertaining, though there were only a couple of highlights which stayed with me after the show was done, every moment is captivating while listening. There is an appropriate lyric to close out this review, so in the words of Rosalie Cunningham: “Let me recommend to you my friend / Some medicine / Let me take you for a ride on my bike”.