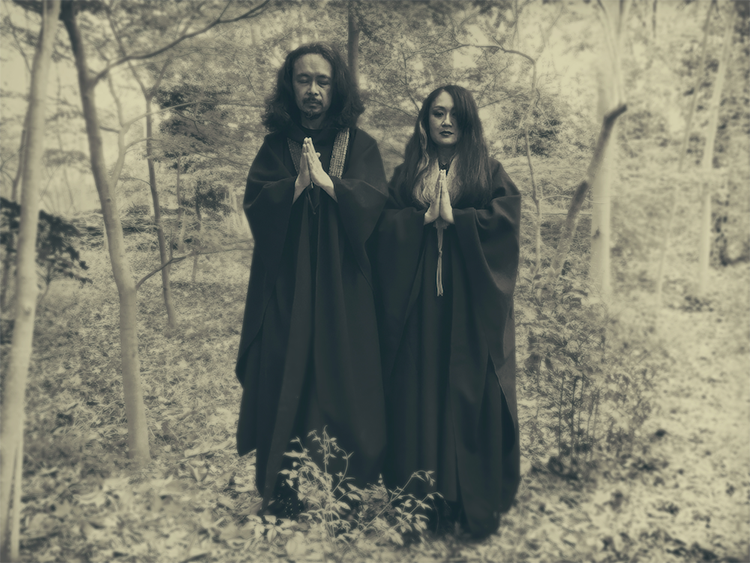 In the context of this new Sigh production, “Shiki” relates to the four seasons. And the final season of life in which we all die.

Knowing this, the beautiful album cover is symbolic of the musical themes with a cherry blossom tree. And with Mount Fuji, mists, a well-appointed man looking backward at what has been.

Though, this man seem he is reaching the end of his path. And is about to turn toward a graveyard and death.

Sigh is a band formed in the late 1980s. With a tradition of making the first letter of their major albums correspond with the sequence of letters in the band name.

Indeed, “Shiki“ is the start of a third naming cycle, hence the new album name begins with an ‘S’. The band are placed in the black metal genre within marketing material, and the predominately growled vocals warrant the description. However, in listening to band there are strong progressive elements to Sigh‘s material.

For your consideration there are music videos for “Satsui” and “Mayonaka No Kaii”. Predominantly the songs feature the almost staccato vocals and flawless heavy backing instrumentation. They also demonstrate some of the experimental sounds the band incorporates. The latter features robotic vocals, Deep Purple like keyboards, and Moody Blues/Jethro Tull folkish wind instrumentation. Of which there is a stronger resemblance on “Fuyu Ga Kuru”. The former has more a standard approach. Until it breaks into a mysterious closure of a slower acoustic instrumentation backed with various drone effects. Including faint speech and electronic effects – like turning an radio dial through a variety of radio stations including tuning static.

There is a lot to love about “Shiki“. And for those who have not yet heard anything by Sigh (like me), it sounds like a masterful collection from a band who are open to experimentation. There is more going on than a black metal assault. So, those who find it hard to tolerate peaceful interludes may not be satisfy. Those who dislike the growled vocal style may similarly best suited elsewhere. For everyone else, this is an interesting group with a long history to explore. Perhaps similar to the character on the album cover, Sigh are aware of where they have been. And where they are headed. In this space there is no point in much except the passionate embrace of all one can be.