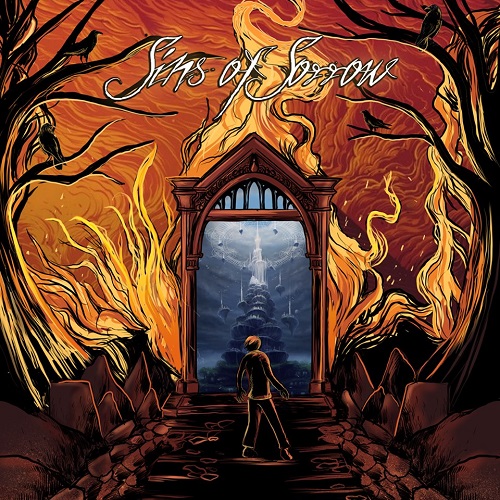 “Sins of Sorrow” is the début EP released by the melodic death metal band Sins of Sorrow. The band comes from St. Albert, in Alberta, Canada and it was formed back in 2016 mainly as a cover band playing Metallica and Iron Maiden songs however the year later in 2017 they started to composing and playing their own material. I’m always curious when a band releases their first album. Basically, I’m curious about how it’ll sound and what they are trying to express with it. In this case, they say melodic death metal but when I read their different and individual band members influences, I’m not so sure. Well, with bands as Tool, Epica, Lamb of Gods, Iron Maiden and Dark Tranquility it could be any kind of metal. But anyway, with five band members, three guitars, drums and vocals we have all the right ingredients for good music. So, let’s see what “Sins of Sorrow” has to offer. It’s a simple EP with five tracks and I can say it sounds great. Despite being only their début, all five tracks contained are already showing their own musical trademark. Maybe the first track “Paradox” can be the best example of how the band sounds and also I don’t think it a coincidence that it was is called “Paradox” because this track shows us the different vocal nuances of Bailey Walker. She sings in both growl and clear, but the change between these two styles is so swift that it’s almost impossible to follow her. I mean this is the real deal because at first, I had some real doubts about the possibility to play it live however I watched a video of her playing it on stage and I can say that she’s really amazing. I think “Hollow Existence” is the most uptempo track of the EP because it shows us the great harmony and co-existence between the two guitars, bass, and the drums. Of course, this the result when a band put a lot of effort and time in composing the musical parts. The guitar solo and Brandon Osadchuk‘s backing growling deserve a special mention. Instead, with “Reflection” we have the opportunity during the first part to listen in full to Bailey‘s clear vocals however it’s remarkable how she reaches the high notes while her growling is deep and low. Both “What We’ve Become” and “For Nothing” are both tracks that fit perfectly in this album. Generally, in these songs, there is never a dull moment and if you read the lyrics there is plenty of space to ruminate over about the meaning of their messages. And when the album ends with ‘for nothing’ I will say, listening to this album is not ‘for nothing’. The début EP by Sins of Sorrow proves to be a fine release which makes me hopeful for the upcoming full-length set to be ready for the next year. Surely, I’m not the only one who is looking forward to listening to it!