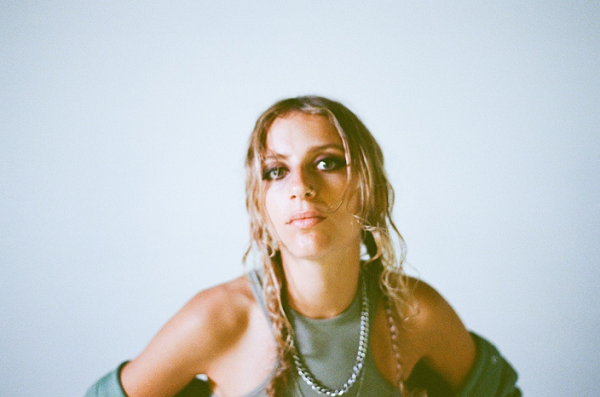 Not so many informations are avalaible about the Kentish Town-based singer-songwriter Grand Pax. However, the most important one is that throughout June and November, she has released two interesting EP called “PWR” and “Wavey” via Blue Flowers/PIAS. If you enjoy some “her dusky bedroom-pop and spoken-word-influenced stylings”, be sure to check out her releases but in the meantime, check out my interview to learn more about her and her music. Enjoy!

Hi there Pax, welcome to Femme Metal Webzine, how are you and how these precarious day are treating you?

Thank you. Every day’s different, it’s too early to say because I just moved in a new place. We were in lockdown and everything was already set up. Actually, me and my girlfriend managed to move in February and two weeks later, we were in a lockdown. Actually, it’s quite funny because there was a lot of DIY involved for the rooms.

First of all, for our readers there aren’t familiar with you, would you like to tell us how was your musical adventure started?

You make it sounds really magical. I like the way that you are talking which I find really colorful. Actually, I didn’t have any other interests other than writing. I started a long time ago with just demoing my mike only and I felt after a while, bored. So, I began to experiment by creating beats that more than anything else, it sounded like old shit garage music. It was just for fun and then, one time I had a dinner with a friend on which I showed him the music. Through him, I was introduced to Josh Crocker and the rest is history, really. What it followed next, it’s my collaboration with him.

Back in June 26th, you have released your first EP “PWR” and subsequently, on the 20th November it will follow the second one “Wavey”. What can you share about their general production and should them be considered complementary to each other?

Yeah, I think the are. Maybe, “PWR” is more harder than “Wavey” which has to be considered much more darker and it reflects the time around that. The first EP is much younger because I worked on it one year ago and as you can see, in a year a lot happened. While, the second one was mostly written during the lockdown. Even if, the experiences were similarly live, they were also slightly more controlled situation which led to a more darker vibe. I would add that they have similar sonic elements and still sound like me and in a way, also with each other. So, they complete with each other.

Both EPs are released via Blue Flowers. When was your first approach with them and so far, how this partnership is treating you?

So, from the beginning, yeah, they were invested and the label is led by Chris Pearson. He’s a really classic, ambitious young guy and he’s been really supportive and very consistent. I have a complete artistic control but then, he really likes to be involved. I believe is a great partnership and it’s done me good.

You stated: “Each track has a life of its own, so you learn from it”. Taking in consideration your upcoming release and your first EP “Wavey”, how would you like to further comment this sentence?

Good question. I guess, I always do so and you can always take some things from any piece of art but you wouldn’t typically assume that artist would learn from themselves later on when by something they have done. Instead, you can assume that you can understand it but some songs come to you really quickly without really get ahold of the situation, In effect, it’s what I meant with “PWR”.

Even if “Wavey” come out really quick, I began it one year ago and I finished off into lockdown. Actually, I got some time to reflect and having that on mind, I have learned from every track. However, some of the songs were rushed in and some other took some more consideration with the different parts. Although “PWR” was rushed in, I would say that even the second track from the “Wavey” EP, “ATV”, was too because that come out really quickly as well.

Out of both “PWR” and “Wavey”, there were respectively released two singles, one is “One of Us” and the second one is “Wavey”. What insights can you share about these two songs?

They are different. I think, “One of Us” was written one year or even more ago while “Wavey” was written this year. They are quite far apart. Actually, I’m really proud of “One of Us” because it’s quite a seductive song and honest. However, the one thing that “One of Us” has in common with “Wavey” is the depiction of images like in a sort of a film.

You know, when you have the film squares coming, so, if you slam it down and see each frame instead of having one moving picture, you watch frame by frame by frame. In essence, with “Wavey” I was trying to depict something quite specific and graphic. Instead, “One of Us” is related to something that makes you feel good, that varies and it’s very sure of itself and youthful but commanding.

I really love the video of “Wavey” that was recently released. It was directed by Silence Atken-Kill. Which details can you offer us about the main idea?

Fucking cool, isn’t it? Of course, “Wavey” makes you think about colors and movements. We sat down together and we thought that already with the “PWR” video, we had a strong narrative because it features multiple locations. So, with “Wavey”, we wanted to something that had a clear difference between the two. We wanted to be more abstract, intelligent by using a minimal elements.

Consequently, we decided to use the silence with lasers to really like enhance the idea of movement in a space but it necessarily does mean that it has to move much. Because of that, you are already getting a lot of movement and you have the colors that represent the mood of the track. So, right away with just an element, you got two things interacting together. It was fucking genius.

Additionally, your second EP feature some interesting collaboration with Exmoor Emperor for the songs “Wavey” and “ATV” and on the other hand, how was it to work with Gotts Street Park’s Josh Cocker. Why did you opt for this solutions and what did you learn from these experiences?

Well, I didn’t plan that. It just happened because I write a lot and with both authors too. However, I didn’t expect to use two different producers but they sound like each other and they make sense together, so, it wasn’t necessarily relevant that. It didn’t matter that were the same guys, it’s just the song fit the mode. Even if I wrote the songs an year earlier, for me, they made sense because they sounds like brothers.

What the future holds for you you and how the pandemic has impacted on your plans?

Currently, I’m writing some material for a record, eventually. But, I’m not sure because of the lockdown and with the Coronavirus pandemic, everything is up in the air. I would really like to do some show but I don’t how it will going on with that.

I will just keep writing and trying to use my down time to my advantage. Actually, I have some tracks already recorded that I’m looking forward to share, so, I don’t know I’ll have to wait. But, hopefully, not too long. Also, I’ll try to grow more as an artist by doing some features.

So, Pax, we’re at the end of the interview. Please be free to say hi to your fans and our readers. Thank you.

Thank you so much to taking time in calling me.