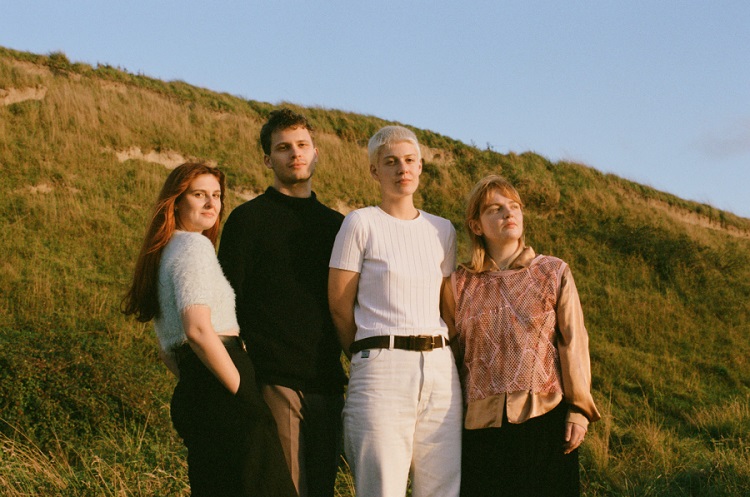 “Waterslide, Diving Board, Ladder To The Sky“ is the band’s third album, but my first experience with Porridge Radio. Their sound and vision take me to the Seventies and Eighties: a bit of punk, a lot of melancholy, music with a British accent, a Leonard Cohen rhythm, the turned-off beat from Madness, song titles sometimes spelled out Prince style (“U”,“2”), Doc Martins, Peter Garrett (Midnight Oil) dancing, the elongated notes formed by the electric organs seemingly ubiquitous throughout the churches of childhood.

There is undoubtedly a difference between the memories and what Porridge Radio delivers. For me, Porridge Radio has developed the talent to distill a bleak essence of the period and artists; for example, The Cure, Patti Smith, Sinead O’Connor, and Michelle Shocked. With lyrics tending toward emotional one-liners, I drowned in the sonic sea of bleak repetition. Surfacing for a breath (and being haunted by those church organs), I began to disassociate from the album, preferring to pick out the likenesses to remembered days. “Birthday Party” is probably the song where I became self-aware of my disassociation. The chorus comprises the lyric “I don’t wanna be loved” repeated for about forty seconds – there are two episodes of it in the four-minute song. My disassociated mind traveled to a late Eighties movie called “Say Anything” – many might be familiar with the meme of a stereo held high overhead bought to us in this movie by John Cusack in his teen idol days’ final throes.

A scene in the film takes place at the prototypical post-graduation party. The best friend of John Cusack’s character (played by Lili Taylor) was an outsider with a broken heart. She sat on a sofa playing the sixty-three songs she wrote about the boy who would not love her back – the lyric “Joe Lies” is repeated a few times with passion.

Back to the present and Porridge Radio has starred in a couple of music videos – “The Rip” and “Back To the Radio”. Both of these have moments of lyrical repetition. But “Back To The Radio” does so within an increasingly strained chant and is my favorite track of the album. Looking over a few of the band’s older songs, I find they are more in tune with me. So, it might be this album hit a personal and sad note – which, of course, is unlikely to occur for you. However, if the measure of art is whether it creates an emotional reaction within those who experience the artwork, then “Waterslide, Diving Board, Ladder to the Sky” is a success.