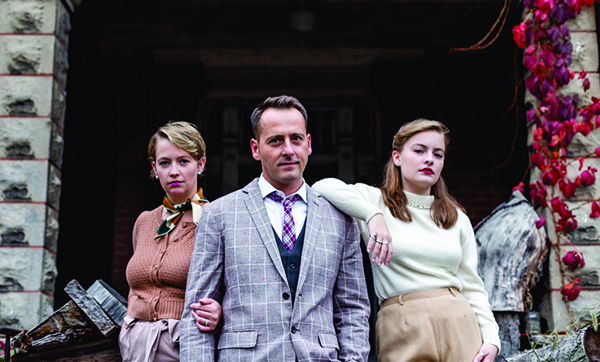 Hailing from rustic Darke County, Ohio, Shannon Clark & the Sugar Americana/indie-soul act, Shannon Clark & the Sugar, announce their  single, “Let It Ride” (out 2/19/21) from their first full length album Marks on the Wall, produced by   GRAMMY Award-winner Mark Howard (Bob Dylan, U2, Neil Young, Tom Waits, Lucinda Williams, Emmy Lou Harris, Willie Nelson), to be released May 14, 2021.  Lucky that talent runs in the family, the husband, wife, and daughter team write and perform their original music about personal loss, struggles and the human condition, weaving together heartfelt emotions with a distinctive flair.   “Let it Ride” is a Swampy, Down-South,  Alt-Country and Mississippi blues-influenced track with the modern touch of Jack White and classic vibe of Steve Earle. According to Clark, the song contains  “A strong message about pulling yourself back up no matter what. I’ve had a rough life to say the least and I wanted to show that bad things happen to everyone, but you have to let things go and move forward at all costs.”

LISTEN TO “LET IT RIDE”

Clark tells premiere partner Audiofemme, “Everything in that song, every line that I sing in that song is real. I do have a sister that lives in Modesto, I don’t ever get to see her. She’s my half sister. My dad, who I didn’t meet ’til I was 24, I found him, he didn’t find me. My mom went through a lot of abusive relationships when she was younger.”  “For Shannon Clark, the journey of this particular blues song is exploring the negative elements of his past before shrugging them off triumphantly – leaving them not in the dust, but as a carefully placed notch in the belt of existence,” states Audiofemme.

The trio’s journey to their current arrangement was not an easy one. Husband and wife duo, Shannon and Brittany Clark joined the Warped Tour to represent Ohio in the mid 2000’s. Soon after, tragedy hit the family with the loss of their second daughter. For a time the music stopped. However, the pair swiftly found that creative songwriting would become the healing tool that brought them together and revived the band. When their oldest daughter, Navie joined in 2019 as a vocalist/instrumentalist, they began experimenting with a new sound and Shannon Clark & the Sugar was born.