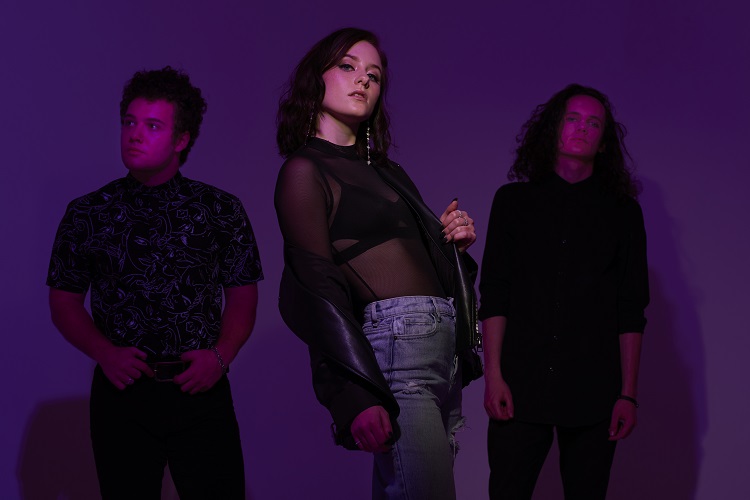 The promising and young rock band Concrete Castles is ready to shook our hearts (and ears). The Pennsylvania-based alternative rock band has just released its debut album “Wish I Missed U” via Velocity Records/Equal Visions Records which is accompanied by an extensive US Tour. Let’s learn more about it in this interview. Enjoy!

Hi Audra, welcome to Femme Metal Webzine. How are you? And, how are these precarious days treating you?

I’m doing great! It’s been a weird year with everything going on, but happy to finally get things going on our front with releases!!

Despite the young age, Concrete Castles is a well-oiled machine ready to kick ass on tour. However, how did you, Matt and Sam come together?

Matt, Sam, and I met through a program in our hometown called the Rock School. Matt & Sam took music lessons there and I applied to be in a band

I got put into a band with Matt and Sam was in another band basically running parallel to us! When our old members left for college, Sam hopped over & joined us! The rest is history!

As many bands Concrete Castles started as a cover band on YouTube, what did you learn from this experience? And how useful did it turn out now that you’re about to go on stage?

We learned so much about recording and writing from doing covers when it came to rearranging songs, writing new parts, changing vocal lines, adding harmonies and so much more, we felt much more prepared to deal with our own original stuff.

We got pretty good at creating our own content, including filming and editing, so it’s easy now to do whatever we want for the original side! It just opened so many more opportunities.

The upcoming album “Wish I Missed U” was produced together with TWIN XL‘s John and Stephen Gomez. How did Concrete Castle cross path with these two acclaimed producers? Then, how was working with them?

John and Stephen are AMAZING. Our now manager, Michael Kaminsky at KMGMT, saw us play a set at Warped Tour in 2016 and ended up reaching out to me about coming to LA for a writing trip- my first one ever. That’s when I met John and Stephen and wrote one of the songs on the album now, “Thrill”.

Working with them has been surreal, we listened to them growing up and they are absolute geniuses when it comes to all thing’s music. They’re so friendly and so helpful, we’ve learned so much from them and I couldn’t have produced such an amazing final album product without them.

“Wish I Missed U” also features the collaboration of the songwriters Blake Harnage, Tyler Smyth, Jayden Seeley, Mark Maxwell and Esjay Jones. How did they help you shaping the sound and the songs on the album? Also, which is the biggest life lesson that you have learned from this collaboration?

Working with a bunch of writers for this album was such a cool experience. Since this was our very first album, it was a way for us to experiment with our sound. We wrote tons of other songs that didn’t make it on the album that sounds much different than the final product we ended up with.

Each writer brought something new to the table and you can hear that reflected in the songs. I think from that experience I learned that there’s no bad ideas and to be confident in myself because I was so afraid to speak up in the first few sessions. I mean c’mon, these guys are professionals. But they just want to hear your input and help you build off that. I’m very glad I had people to push me to do better and speak up for myself.

From “Wish I Missed U”, the singles “Just a Friend”, “Half Awake” & “Porcelain” have already gathered 1.2 million views on YouTube. What insights can you share about these songs?

These first few singles were obviously some of our favorites. Indeed, “Just a Friend” was the first one we released. We thought all around, this was the best song from the album. We wanted to come out with a bang.

While “Half Awake” and “Porcelain” were opposite ends of the spectrum when it comes to sound on the album because “Half Awake” showed the heavier side and “Porcelain” leaned towards pop. As for “Wish I Missed You”, it was very last minute and was recorded it later than all the others only because we loved it so much. It encompassed the whole feel of the album so well that we wanted it to be the title track

I’m looking forward to getting back into writing. We’re having such a blast on tour finally getting to play out live, and it’s really motivating us to get back and write an album even better than this one. We want to write more, play more, and just keep going up.

So, Audra, we’re almost at the end. Please be free to say hi to your fans and listeners. Thank you so much for this interview.

Hi and thank you to everyone who has been supporting us, it means so much!! We hope you’re loving “Wish I Missed U” and we can’t wait to continue writing music and playing for all of you!