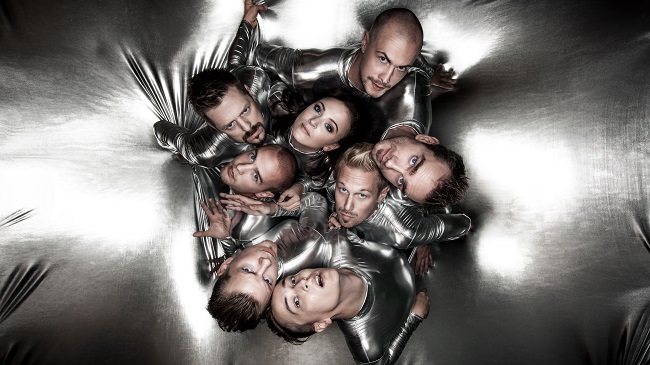 Sweden’s Diablo Swing Orchestra is renowned for its avant-garde approach to its lyricism and music. As the band’s story wants, their fifth album “Swagger & Stroll Down the Rabbit Hole” exceed always the expectations. Are you ready for joining the revisited world of Carrols’s Alice in Wonderland? If yes, the singer Kristin Evegård will be our hostess in their magical and crazy world. Enjoy!

Hi Kristin, welcome to Femme Metal Webzine. How are you? And, how this strange period is treating you?

Hi, thank you so much. I’m fine thanks. As you said, it definitely has been a strange period of time. I’m thankful I haven’t personally been affected that much other than the restrictions that have been in place. Indeed, it really has given you some time to reflect upon things.

On November 2nd, Diablo Swing Orchestra’s 5th album “Swagger & Stroll Down the Rabbit Hole”. What can you share about its general production? When did you start to collect the first ideas for it?

Since we get easily bored and think more is more, the album reflects that kind of mindset. Most of the ideas are maybe 2-4 years old, as well there are a few that perhaps are over 10 years.

The title album “Swagger & Stroll Down the Rabbit Hole” can also be literally and figuratively interpreted. But, what meaning holds for you? And, which is the main connection between it and the lyrics in the LP?

I think the album sums up the overall feeling of the album pretty well. Especially lyric-wise, it has some kind of apocalyptic feeling over it, just as many of the songs on the album. For example, any of them reflect upon the state of our society at the moment. It’s like we are strolling down this dark hole together, looking for answers.

But each time we find one it will just lead to a new question or some other problem we seek a solution to. This whole situation is quite bizarre, in more than one way. But we keep walking, or why not, swagger down this rabbit hole. Who knows what we will find? Or perhaps find out about ourselves along the way.

The album “Swagger & Stroll Down the Rabbit Hole” represents your second album with the band. Personally, which differences can you find between this one and “Pacifisticuffs”?

“Pacifisticuffs” was like a kind of new start for the band. And now with this album, it feels like we all find and land in our roles in the band. Also, we found a really fun and creative way to work together, which I think shines through when you listen to the album.

Personally, I develop a lot as a singer lately, and with some of the songs, it was like I found new ways to use my voice. It gave me so much new inspiration to sing in a new language as I did on “Celebremos Lo Inevitable”.

From“Swagger & Stroll Down the Rabbit Hole”, “War Painted Valentine” and “Celebremos Lo Inevitable” represent the official singles. What can you share about these two songs?

First of all, and perhaps not that surprisingly, they’re two very different songs. In “War Painted Valentine”, Die Antwoord meets Sepultura at the carnival in Rio, while in “Celebremos Lo Inevitable” you get a mix of bolero and metal. I absolutely love both of the songs!

“Swagger & Stroll Down the Rabbit Hole” took 4 years in the making. Why does it take so many years to collect together all the dedicated material?

Well, 3 out of 4 years is the result of us just being slow, and one extra year should be blamed on the ongoing pandemic.

The producer Roberto Laghi, which in some way has to be considered as the ninth member of DSO, help to put together quite an organic album. What is the main lesson that you have gained during this recording experience?

Less is more, haha. No, but, we definitely could make life a little easier for ourselves by not adding that much stuff. Indeed, we can get better at using the space frequency-wise more smartly. But I guess we like challenges!

Roberto’s approach has resulted in an impressive list of guest musicians and some very interesting clashes between sounds. In this regard, how difficult to amalgamate all these sounds and instruments without being “too much over the top”? Also, which are the guest musicians involved here?

Well, I guess we are not that afraid of being ”too much over the top” .If we were, I don’t think we would make this kind of music that we do. But of course, we have some kind of ”frames” for the music. And everybody in the band has very strong opinions about what kind of soundscapes we like and don’t like. Also, the climate is very open so no one is afraid to share their opinion. I guess that is one way to avoid being ”too much over the top” in a way.

As I’ve previously mentioned, on 2nd November, it was released DSO’s 5th full-length. What are you looking forward to the most? And, any plans for a tour?

Since no song sounds like the other, I really look forward to showing you the full spectrum of genres present on the album.

Then, the plan is to do a Scandinavian tour in January, followed by two gigs in Mexico in March and two gigs in Russia in April. A southern Europe tour will follow later in 2022.

So, Kristin, we’re almost at the end. Please be free to say hi to your fans and listeners. Thank you so much for this interview