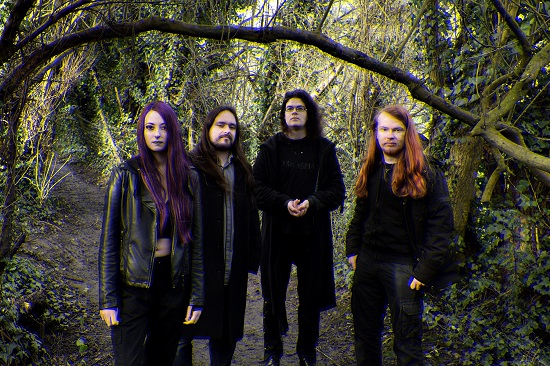 Indeed, the debut is getting re-released in limited edition on CD via BandCamp. In order to learn more about it, we had a chat with the singer Holly Royle. Enjoy!

Hi Holly, welcome to Femme Metal Webzine. How are you? And, how are these precarious days treating you?

Hi, thank you for having me! I’m doing quite well overall; it’s certainly been an interesting time, but I have managed to find a few positives. It’s pushed me to go back to university and start a PhD, and I’ve been doing more sewing than ever!

Before diving into the debut EP “Warring Elements”, I’d like to ask you: how did the band get together and so far, how did this adventure prove to be challenging?

The idea of Disconnected Souls being a musical project was born by Matthew (Fletch) back in 2014. Originally, it was intended to be a side project to his current band at that time, Curse of Dawn. A few years later when that band went on an indefinite hiatus, Fletch began working on Disconnected Souls properly along with Tim and Patrick. I then joined in early 2018 and we properly began focusing on our debut EP “Warring Elements”.

It’s been technically challenging as we’ve basically fumbled our way into music production. We’re now using a ridiculous number of virtual instruments, but they allow us to do things we couldn’t do otherwise such as include a full orchestra or have a sample of the organ from Leeds Cathedral in our music.

I also highly recommend getting a harpsichord sample from a shed in Norway on a snowy day… yes, you can get samples this specific! Anyway, the point is we’ve had a huge learning curve. The process of writing and recording “Warring Elements” has taught us a lot and hopefully these lessons will help our music get even better in the future.

Even if the debut EP “Warring Elements” will be officially re-released in September, when was it originally published? And what can you share about its production?

We initially released the EP on the 13th of March 2020. Shortly after the UK went into the first lockdown. A significant amount of the instrumentation was recorded and programmed in Fletch‘s home studio and in some ways, this gave us a huge advantage both financially and creatively.

On the other hand, we may have stuck to deadlines better if we’d had the pressure of working fully with a studio, but it all worked out in the end! We chose to record drums and vocals at Faktory Studios to have the assistance of a more experienced sound engineer. The EP was then mixed and mastered by Christoph Wieczorek of the band Annisokay.

The EP is titled “Warring Elements”. Which are the conflicting elements you take in consideration? And can this release be considered as a concept album?

Yes, this release is most definitely a concept album! The conflicting elements are open to interpretation, we use language such as ‘fire and ice’ in the lyrics of the title track but that isn’t the only idea. We wanted to explore two opposing forces that aren’t necessarily direct opposites such as ‘good’ versus ‘evil’. Humans are a complex mixture of ‘good’ and ‘evil’ – it’s a grey area.

The Warring Elements are opposites, but neither is ‘good’ nor ‘evil’ – if you’re wondering why I’m using inverted commas for this it’s because ‘good’ and ‘evil’ rely very much on perspective… although I won’t get into this just now! “Warring Elements” is set in a fictional universe which will allow us to explore other ideas with future releases that all link together (hopefully). If we’re going to do concept albums, we might as well go all in right?!

Disconnected Souls efficiently mixes “metal, classical and electronic”. Actually, which are the influences of each band member?

We draw influences from so many areas, we all love fantasy and play Dungeons and Dragons. Space, time, science, fiction, literature, music, nature, philosophy are all subjects and interests we draw from. Some of the artists/ bands we like are:

Considering that each of you in the band brings in his own experience and musical taste, how do all these elements then generate the band’s sound?

I’m still trying to figure this out ha-ha! It helps that our interests overlap so much. A lot of our song writing, particularly to start with, was collaborative. So, one of us would come up with a melody, chord progression or lyrics and we’d just find a way to run with it, and most of the time it worked well. More recently I’ve started writing some full tracks by myself, and Patrick and Fletch have focused on a few together.

We all have very different compositional styles as individuals, so I think it’s good to have a mixture of some collaborative songs and others where one or two members take the lead with things. In many ways our influences seem to develop organically into our sound. It’s difficult to explain how exactly.

We have this very ambitious idea to make a double album next – we currently have four albums worth of tracks in various states on our OneDrive, so I reckon it’s feasible! We have lost a lot of compositional time by working on our own through the lockdowns and not having access to Fletch‘s studio. I’ve done what I can at home, but my equipment is limited.

We’re trying to really focus on this album as our next big goal with a few smaller single releases soon. A music video or two are also in early planning stages, again just thrown off with the past year. We also have a tradition of releasing Christmas cover songs on our YouTube channel, I know it’s early yet, but we should probably start work on this year’s cover!

So, Holly, we’re almost at the end. Please be free to say hi to your fans and listeners. Thank you so much for this interview.

Thank you so much for having me! I hope my answers have brought some sort of enjoyment and entertainment. I really appreciate everyone who takes the time to check out our music. We’re a small metal band hide away in the Northwest of England so the fact that people in the US, Scandinavia and even Malaysia want to buy our CDs amazes me! So, thank you for the support it truly means the world!