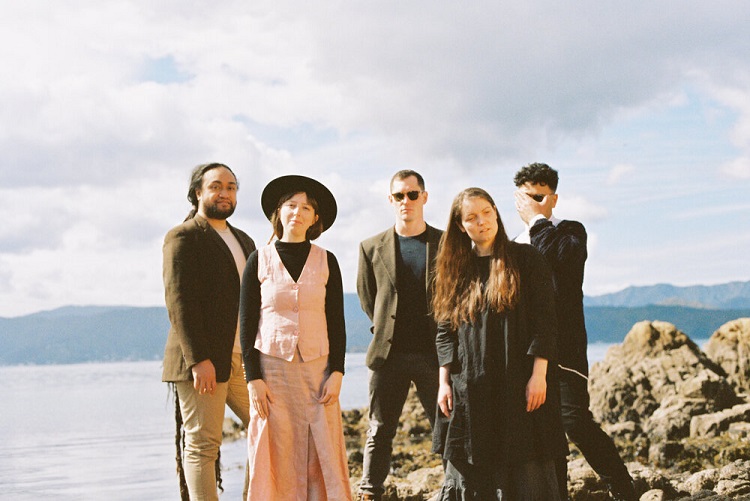 FRENCH FOR RABBITS – An Interview with Brooke Singer

New Zealand’s best-known export French for Rabbits continues to enchant with its dreamy folk-pop. Strong of the new third album “The Overflow” out now via AAA Records / Home Alone Music, Reckless Yes (UK), and A Modest Proposal (Italy), the band is ready to spread its wings and conquer more fans and hearts. Let’s read what singer Brook Singer had to say about the latest release. Enjoy!

Hi Brooke, welcome to Femme Metal Webzine. How are you? And, how are these strange times treating you?

Thanks for the warm welcome! It’s summer here in New Zealand, so I’m hanging out for some time away from computer screens and social media. Instead, I’m exchanging my time for camping and beaches.

Also, I plan to go canoeing a lot. I’m not very good at it, but I intend to be.

In the meantime, I deleted social media and the news off my phone this year. Given the current circumstances, it kept giving me pangs of anxiety.

For those unfamiliar with French for Rabbits, would you mind introducing how did the adventure with your band begin?

French for Rabbits started ten years ago as a duo composed by myself and our guitarist John. It was around the time that there was a large earthquake in Christchurch that we wrote our first song “Claimed by the Sea”. Following this, we moved to Wellington and released our first EP.

Since we played some great shows in the ballroom of a gracefully aging old house called The Moorings, I always love the excitement of a new project. Indeed, you had to climb through a window to enter, and the walls were covered with nautically themed paintings.

These events relates to ten years which is a long time. A lot has happened between then and now. We’re a five-piece these days, have toured a bunch, and had some very memorable moments as a band. A deep scroll on our Instagram will give you more of the rest of our story!

French for Rabbits’ new album “The Overflow” was released on November 12th via AAARecords (NZ/AUS), Reckless Yes (UK), and A Modest Proposal (Italy). What insights can you offer us about its production? When did you effectively begin to conceive the ideas for it?

In 2019, the arts organization I was working for made my whole office redundant. At the time, I was a little miffed about it but the silver lining was that I suddenly had rather a lot of free time. We’d already planned to go to the USA for the first time to tour, and I got the opportunity to spend some time co-writing in LA, Sydney, and Auckland. I’ve written songs since I was a kid, and it was really refreshing to be able to devote myself to learning from others, especially in the pop world.

I brought a bunch of what I’d learned into this record, and we worked with a co-producer to get an outside perspective too. I wanted to combine our French for Rabbits sound together with the live instrumentation with some pop production techniques. Such as sidechaining, pitch shifting, automated reverbs, samples. Then, messing around with sounds to create something that was super beautiful and detailed.

You have publicly declared that “The Overflow” is an album for introverts and deep thinkers. Lyrically speaking, what does lie behind this?

I suppose when you’re a bit of an overthinker and a bit shy, you can spend too much time anxious about the world and feel a bit like a lonely weirdo from time to time. This album happened to explore this. Though, not on every song but enough that it felt like a bit of theme that was woven through the record.

I think there are so many ways to explore these ideas. Like on Little Simz’s new record or even on Fiona Apple‘s “Fetch the Bolt Cutters”. I think my songwriting tends towards being self-reassuring. So, it’s comforting instead of visceral. Hopefully, I think that makes it a kind listen and relatable.

How difficult and/or comforting can it be to openly speak about your fears and feelings?

I write songs for myself, and if I like them and the band likes them, then they turn into something we share. Generally speaking, I don’t love to talk about my feelings. I’m not in the practice of it. Although I admire this trait in people who are really open about expressing themselves, I wish I was naturally more like that!

Though, a song seems like a safe place. It only becomes awkward when I have to talk about them after. Then, I worry that others will find my deepest thoughts boring!

From this incredible LP, four singles/videos have been released: the title track, “The Outsider,” “Walk the Desert” and “Ouija Board.” Can you briefly comment on each of these songs and their companion videos?

Sure! Well, it was really amazing to be able to make videos for so many songs on this record. Also, we made a video for “The Dark Arts” too on a shoestring budget and dust from a vacuum cleaner. It was shot in an amazing architecturally designed church which has since been knocked down by a developer. Indeed, “The Outsider” is the most definitive song about being an introvert on the record. For the video, I dressed up as a ghost and attended a party. It ended up being such a cinematic and magical video, we worked very hard on it, and I’m really proud of it.

While “The Overflow” is about anxiety and having a very long to-do list (among other things). For the video, we wanted to make something that was both optimistic and precarious. It’s very yellow. Essentially, “Walk the Desert” is about containing big feelings. We don’t live near any deserts. So, we filmed the video in Waikuku Beach where I grew up. I had to learn very quickly how to row a precarious old rowboat around the estuary. I didn’t fall in, but our director Martin did! Lastly, “Ouija Board” is musically inspired by The Beatles and The Addams Family. It’s kind of kooky and psychedelic. The video is equally surreal and strange. It was directed by our friend Misma and shot on film. Indeed, I think it’s a mini-masterpiece.

The last LP “The Weight of Melted Snow” was released back in 2019. What are the main differences between this album and “The Overflow”? How has French for Rabbits evolved?

Indeed, “The Weight of Melted Snow“ was our second album. It wasn’t THE difficult second album that everybody expect, but a more serious and ponderous collection of songs. Comparatively, “The Overflow” is much brighter. It’s a very much band record in service to the songs. It is an album where I was obsessed with the songcraft. We wanted it to be lighter and more creative.

I feel like there has been a shift, not just by us but by many artists. And this happened in response to a kinda heavy world of the moment, where we’ve had an urge to create something cheerful or silly or comforting.

What are the band’s upcoming plans? Is there a tour on the horizon?

Next year we’ll be heading out on a New Zealand tour. Beyond that, we’ll just be waving this new record under everyone’s noses until they decide to listen at least five times each. Kidding. However, we have a few new songs I’d love to record. And if we can get overseas for some shows we’d love to. We make a great support act, if anyone playing nice theatres would like to take us out on the road!

Please be free to say hi to your fans and listeners.