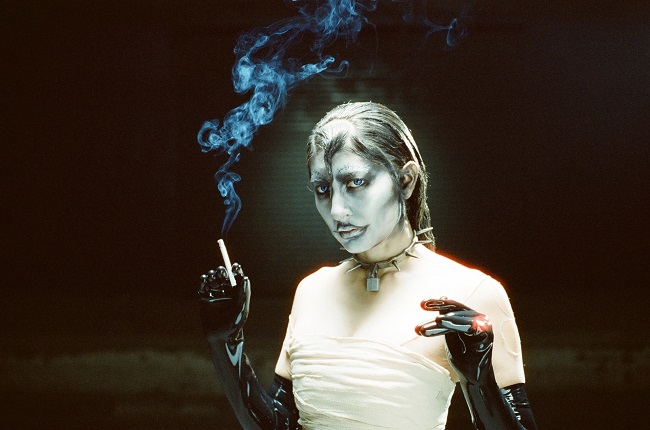 There’s something intelligible about doom/post-metal King Woman‘s Kris Esfandiari. Her aura is conglobating many lives, many artistic sides of the same person and many personal experiences at the same time. Indeed, that’s one from this factors that “Celestial Blues”, out now via Relapse Records, has shaped up. Also, King Woman‘s second LP represent a closure in her one of her much struggling period of her life. Let’s learn more about it here.

Hi Kris, welcome to Femme Metal Webzine. For me, it’s an honor to have an interview with you. First, how are you? And how these precarious days are treating you?

Thank you. Despite everything, I’m great. My new record is coming out and we have some sold-out shows to play. Indeed, life is good.

“Celestial Blues” marks your comeback after your previous release back in 2017 with “Created in the Image of Suffering”.

Even though you are always busy with several other projects, how did it feel to approach such material after a long time?

Between 2017 and 2021, I’ve evolved a lot. You know, you go through a lot of experiences that can be both good and bad. For example, a relationship. In this, as a songwriter and human being, there’s a lot of trial and error in the recording process.

You have been always a dynamic artist who loves to experiment and to fluidly switch between different musical genres. And this new King Woman album is something different. How did you manage with that?

I simply started to channel my power back and being quite selfish with it. It was only for me. I’ve also started to be unapologetic about my creating direction, so I started to not hold back in what I wanted.  And trying to hold to the standards that I had. Regarding the vision, it came to me quite naturally and it did happen.

I had the chance to watch your new photoshoot done with Nedda Afsari and I find it incredible. Even though I find it amazing, at the same time, I find terrifying the way you portray this woman.

By watching both the promo videos and the photo shooting, I tried to come to terms with the meaning of it. So, what this woman stands for? And how this persona connects to the lyrical aspect present on the LP?

Thank you. If you are referring to the video of “Morning Star”, I’ve visually depicted Lucifer. But, for me, its name is not Lucifer, it’s an androgynous, non-binary character called Ashktar which represent the transformation. Just going through the soul’s darkness or hell and coming out on the other end with more experience on your shoulders. Even more magnificent and stronger. Essentially, as an unstoppable force.

Related to this, I meant to ask about the collaboration with Nedda Asfari. When has it started? And how was it working with her?

Of course, the photos were shot by Nedda, but the styling was created by me and my friend Giorgia. However, the creative direction is solely mine. For what concern the collaboration with Nedda, so, she’s an incredible photographer and she’s one of my best friends. Indeed, we wanted to work together for a while, but her schedule was always busy, now it finally has happened.

“Celestial Blues” was recorded in Oakland, California together with Jack Shirley. How was collaborating with him? And as an artist, which is the most valuable lesson that you have learned throughout this experience?

It was nice to work with him. And for me personally, it was important to learn to have standards and to not let anybody tell me otherwise. For example, if I think that something doesn’t sound right, I need to speak up and not be afraid to being called a bitch, a diva, or that I’m hard to manage with. First and foremost, my artistic integrity comes first, and I need to uphold to that.

In the press release, you stated that “creating this album has brought me great pleasure and closure”. What I’d like to focus on is the word closure because it seems to that you have closed a chapter from your past. Why?

I think I’ve closed a chapter on my pain and suffering through religion. I’ve been able to master these archetypes and turn them into characters and a play. And if you can turn them into that, you became a master. And for what concern relationship, I’ve closed a toxic circle. So, it’s a lot to unpack.

As I mentioned before, I really love “Morning Star”. On first instance, why did you choose this one? What meaning holds for you?

I don’t know. I just follow my instincts. It was a really striking song with some striking visuals, so it could come out something strong out of it. For me this song represents magnificence and transformation, the escape goat, the duality of light and dark.

You just mentioned the concerts in New York which most of them are sold-out by now. What the fans should expect? Also are you planning to bring these special shows in Europe too?

What the fans should expect is the full live performance of “Celestial Blues”. And yes, I’d love to bring these shows in Europe too but there’s a lot of issues with the COVID pandemic which we are trying to sort out.

Besides these US shows, what is the pipeline for you?

There is a lot going on of which I cannot talk about. However, for this year we’ll just play these shows in Oakland, New York, and LA. Then, for the next year we are organizing some tours hopefully in Europe too. Lastly, I’ll record some covers.

So, Kris, we’re almost at the end. Please be free to leave us with your last message. Thank you so much for this interview.

I guess, it’s time to say thank you for the love and support towards my record. For buying it, for the kind words. I’m excited to see you everybody at the shows.