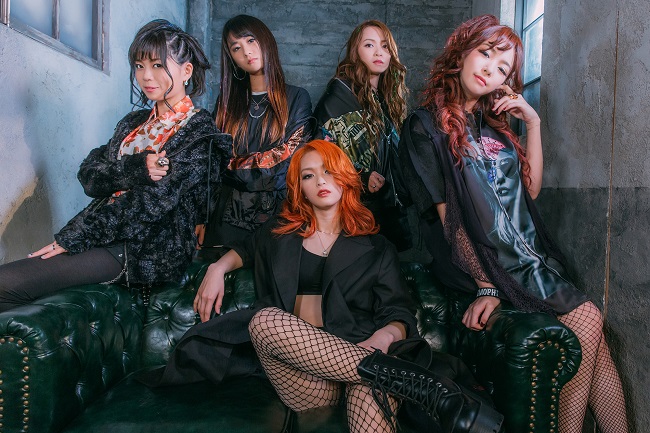 A new force in looming over in the sky in Europe and no, it’s not a typhoon. But, it’s arrival of the Japanese all-girl heavy band NEMOPHILA. In occasion for their first oversees release published via JPU Records, “OIRAN” Extended edition, we got in touch with their singer, mayu. In this interview, the leader offers us a glimpse about their story and passions. Enjoy!

Hi mayu-san, how have you been recently?

Hello! Recently I’ve been working on hard on song writing because we’re in the middle of a production period. New material will be announced soon!

For our overseas readers who are not familiar with NEMOPHILA, would you mind introducing the band and how it started?

NEMOPHILA started as from a jam session in 2019 under the name “mayu session”. After several live performances we decided to make the band official in August of the same year. Our first show was opening for LOUDNESS and Hammerfall on each day of METAL WEEKEND 2019 at Zepp Diver City Tokyo.

NEMOPHILA will release OIRAN Extended Edition outside of Japan this month. Can you tell us about the songs that are included?

“OIRAN: Extended Edition” is a collection of our three singles so far; “OIRAN” EP, “RAITEI”, and “DISSENSION”, with each track remastered. It also includes the English version of “DISSENSION”.

Recently NEMOPHILA joined JPU Records in the UK. Were you surprised that an overseas label was interested in you? How did this partnership start?

Yes, we haven’t released our music yet in Japan except directly from our website, so it was a surprise to have our CD in shops in Europe and America first! JPU Records found out about us and approached us to negotiate on a release. Now we can connect with people anywhere in the world because of the internet. I think it’s an era for bands like us who have an interest in other countries.

Are there any differences between OIRAN Extended Edition and what you have released so far in Japan?

As I mentioned earlier, it includes the English version of “DISSENSION”, plus all previous songs have been remastered. Unfortunately, I can’t speak English at all, so recording this new version of “DISSENSION” took a long time! But, I had SAKI and Teshima-san from Berklee College of Music to help with pronunciation.

It was really hard work! Even if I knew the word in my head, when I pronounced it was different, it made me think that English is delicate and difficult. I had to focus my head like I was back in school preparing for an exam. Indeed, after I finished recording, I was so exhausted that I almost left the studio without my big luggage!

NEMOPHILA raised to fame for their sensational YouTube views of their cover songs. My favorite are Iron Maiden’s “Aces High” and SHOW-YA “Rock Love”. First, how do you decide which songs to cover? And have you thought about doing an officially recorded cover?

Thank you! Most of the cover songs on YouTube are my choices. We all think about the concept. At the moment, we haven’t thought about an officially recorded cover yet, but it could be something for the future.

Despite the pandemic, how have things been for NEMOPHILA? Are you busy at the moment?

Even with the coronavirus we didn’t stop working. I think ingenuity dictated how we spent time during this period. We practiced remotely and could continue working, it was our only option to keep going forwards. I think it also led the way for us to release “OIRAN Extended Edition”. I’m grateful that I’ve been busy spending my days in production.

Do you have any comments you would like to give to overseas fans?

Due to the pandemic, it’s not a time to go abroad easily at the moment, but we definitely want to be on stages overseas! So, I look forward to the day that we can spend exciting moments with you! Thank you to all those who support NEMOPHILA.