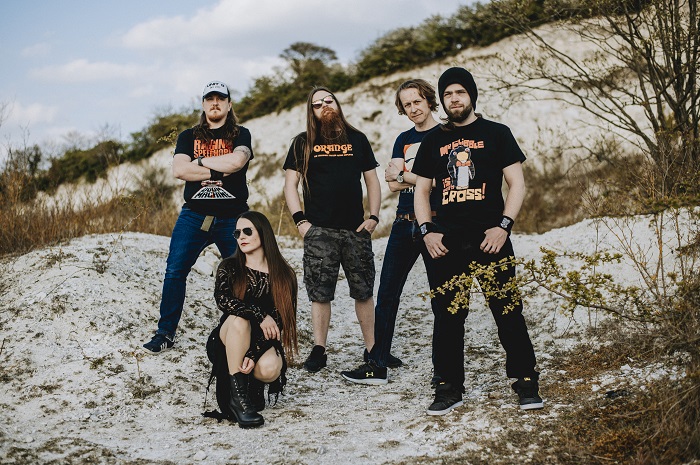 The story of how this Cambridge-based heavy rock band can be compared to a chameleon. Before transform into Planet Fatale, the band was called Powderhead. With this moniker, we can count one full-length and a live album.

Then members come and go, but it’s when the two guitarist of the band joined the ranks, the band has finally stabilized their line-up. Indeed, this helped in creating what is now the debut of Planet Fatale, “The Cycle Repeats”.

In that regard, we have enquired singer Hels Johnson. Let’s read together this interesting interview. Enjoy!

Hi Hels, welcome to Femme Metal Webzine. How are you? And how these strange times are treating you?

Hi, nice to meeting you. I’m nothing too badly, thank you. Yeah, this period has been quite strange, and it has been quite difficult for all the musicians.

We love it so much our job and it turn out to be quite productive time during which we have worked on our album. Now, it’s about to be released it.

Before dig into your brand new single and debut, how you guys got together?

So, me, Ollie and Miller have been playing together for quite some time. About 5 or 6 years. Indeed, we’re already playing together in another band called Powderhead which up to now, it dissolved because our old guitarist moved away. Then, we got a new guitarist, and that event marked the inception of Planet Fatale.

Each of us have been actively present on Cambridge’s musical scene for a long while with different outfits. And we already known each other well by playing in the same musical scene and supporting one another. Basically, how the band got together was through an advisement for two guitarists. Then, we headed off and started writing together.

The new album is called “The Cycle Repeats” which it was released on the 17th September. What can you share about its production? When you guys started to collect ideas and kick off its writing process?

So, before we got the guitarist, we we’re already beginning to try-out some material between me, Ollie, and Miller. Just vocals, bass, and drums. Indeed, once re-worked, these songs made into the album. However, when Simon and Chris joined the band, they added their touch on top of our structure. It turned out beautifully because some of the songs gained a new life.

Frankly, it was strange to compose without the guitars and normally speaking, the songs in a rock band are guitar driven. Though, approaching our songs in that way, it was quite interesting. After they joined, we carefully selected the best songs that we had and just focused on those.

For example, one of our songs were born out of a bass riff. Given this, my hope is some of the songs will speak for themselves and have some personality just only for how they were constructed. All this process lasted 1 year and at the beginning of 2020, we booked our studio. Unfortunately, the restriction enforced at that time prevented us to go forward with our plan. So, over the course of the following year and in lockdown, we spent additional time on listen to our songs and re-working them by making demos and improving them.

Probably, thanks to this unlucky situation, I think the album is really a bit different that it would be than its first iteration. Luckily the restrictions were lifted which made it possible to enter in the studio at the start of 2021 and record our songs together with the amazing producer Russ Russell. When our recording session finished, it felt incredible to listen to our songs and how they finally came to life.

Well, you have previously mentioned working with Russ Russell. How was your experience? And most of all which is the most important lesson that you gain?

Well, working with a producer with Russ’s experience, it was honestly a good learning experience. He recorded all four of us and Russ holds a specific style and technique. Due to the ongoing situation, we’re simply locked up in the studio and throughout this time, he given us ideas of how our music should sounds. Even though, we are a heavy rock band, in our sound there’s a lot of metal elements.

Musically speaking, his production helped us to harness exactly how we want to go forward with our sound. Indeed, this was one of the major learning curves. Then, generally, for the next full-length we will much more prepared. It is always about little details that if they get sort in the right way, they can make the difference.

Out of “The Cycle Release”, we have the single “Talking to Myself”. What about its lyrics and its video?

So, the song is about that seed of doubt that can rise in your mind. As you can see in the video, there are two versions of myself. One of which is drag me down in this uncertainty and stopping to do what I would like to do or what should I do. What’s happens next is that I go through in this desert and then, what I’m trying to do is trapping in a box this wicked version of myself. Lastly, I’m getting rid of that box.

“The Cycle Repeats” as a title album is quite straightforward. So, I wandering to ask which is your personal interpretation that you attribute and what does it means for you?

The title album comes from the last track on the album. Essentially, what does mean in that song is the idea of pushing up something wrong and it happens again and again. You know, in the end it gets cyclic. It’s like trying to push boundaries the whole time. It’s what I felt with that song. And with the album, I’ve explored that quite a lot. It mostly relates with life in general and how we are all going through that in our experiences that we had. I came up with some characters in our songs.

For example, “Fight Club” follows somebody who’s down on luck and people end up taking advantage of that situation. I guess, it’s like witnessing these situations in real life. It’s like a cycle repeats itself. In that sense, the title album can mean something also quite negative. You know, the title album is there to say to us that no matter what you do, you end up the same thing.

However, the title album can also hold a positive meaning which can relate to a rebirth and re-invention. Ultimately, I think the title album represents a boundary between pure cynicism and positivisms which can result in a strong view on how I look at the live events.

So, Hels, what is in the pipeline for Planet Fatale? And which are the next plant in support of this release?

So, we will shoot another video for another single and we’re keen on that. Outside of playing live, it’s one of our favorite things. Then, in support of the album, we’re going to play a UK national tour.

Instead, what about a European tour?

We’d love to do that, but we haven’t pull that yet. We’ll going to see how the UK works and we’ll think how that can be arranged. All in all, the European tour can maybe happen next year which can be fantastic. But I’m not sure if it will happen for this album or the next one. We must consider if there’s enough demand.

Alas, we are at the closing moment Hels. Thank you for so your time and this the artist’s space where you can add and conclude our interview with your last words.

Thank you very very much for having me and for your insightful questions. You’re fantastic. We’re Planet Fatale and we’re a heavy rock band based in Cambridge. Also, we are looking forward to doing our favorite thing: playing our live shows.

Just expect from us a lot of energy and we’re seriously looking forward to seeing you on the road. Concluding, I’d like to remember our YouTube channel where you can check out our music videos.