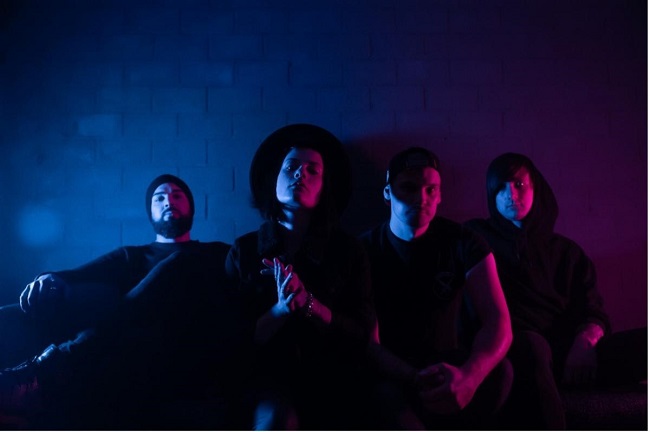 SETYØURSAILS – An Interview with Jules Mitch

Strong of their new second LP “Nightfall” and label debut with Napalm Records, German metalcore newcomers SETYØURSAILS are ready to invade the music panorama with their exciting mix of melody and brutality. On this matter, I took some time to ask a couple of question to the singer Jules Mitch. Enjoy!

Hi Jules, nice to meet you, and welcome to Femme Metal Webzine. How are you? And, how is this strange period treating you?

[Laughs] First of all, thanks for having me. It’s a pleasure. About the situation with the pandemic, well, it’s weird because a couple of weeks ago the clubs were opened. And now, they are just closing again.

We had a couple of shows coming up which have been canceled. So, we’re a bit stressed from that. But, we are hopeful that the tour will take place in May. And then, promote our new album.

Since it’s our first time talking together, I would like to start from the beginning. So, how did you guys get together? Which was the spark that make all this happen?

I guess that everything started in 2017 when I moved from Frankfurt to Köln. And, I was searching for someone to start a band. Eventually, I read a post of our lead guitarist Andre on Instagram where he too, was searching for people to set up a band. Subsequently, we met and we fit from the first second.

Then, always through IG, I came in contact with our current drummer Pascal. After meeting them, it felt like I had already known them for a long time. Lastly, our bassist Dominic joined through a mutual contact. At the time, I and his wife were working together. And, she recommended him to me. Then, we simply invited him. Everything happened 80% via social media.

We began to play pretty soon. From which it followed our debut album. It was recorded by ourselves in our bedrooms. The songs sounded like a demo. Then, we throw it out. It was independently released. Mostly, the reason why we opted for a quick-release is that we wanted to play live. We needed to go out and play a show because it’s what we do best.

As you have previously mentioned, the album followed in 2018 and it’s called “Enough”. Considering everything, how do you still feel about it? And how did the band stylistically improve from that period?

As I’ve already said, we feel like “Enough” is just a demo. You know, at that time we knew each other only for half and year. We are not proud of that release because we have recorded it with the sole objective to play shows. Instead, with “Nightfall”, we took our time as a band to work together with a producer.

This whole process was important to figure out how we want to sound and how the record was supposed to come out. Since “Enough”, we have changed a lot. That album pushed us to improve and to show ourselves that we are worth more than that.

Precisely one year ago, SETYØURSAILS signed a contract with Napalm Records. If I were to ask you to make an overview of the past year, what would your reply be?

First of all, it was really hard to hold back our album because “Nightfall” was completed already 1 year and a half ago. I believe it was ready from August 2020. As said before, it was also hard to push forward its release because we were eager to let everybody know how much was improved. However, due to the COVID pandemic, we weren’t able to jump on a tour and for the second time, we had to push forward our release.

Indeed, as a newcomer, it doesn’t make any sense to publish new material when you aren’t able to promote it. But, in the meantime, we were working a lot. During this period, we shot the promo video and we already started to compose new material for the next full-length. We had a lot of promo interviews, we had a new photo shooting, we had several business meetings for our plans. So, we dedicated ourselves to building our team.

Including our new booking agent and the crew that it’ll come with us on tour. But last not least, we did a lot of paperwork including founding a company for the band. As an artist, we wouldn’t like to deal with paperwork but if you need to be a professional band, you have to face it [laughs]. It was exhausting but we are happy that we have managed it. Now, we just want to start to play.

So, “Nightfall” was released on January 21st . What is the idea behind the whole album? And, how was its production session this time around?

Well, we went into the studio with one of my favorite producers here in Germany, the guitarist and lead singer of ANNISOKAY, Christoph Wieczorek. Indeed, he owns one of the famous studios in Germany dedicated to the production of metalcore and metal in general. Together with Christian collaborated a second producer called Julian Breucker. These guys took the time to sit down with us and discuss our songs in detail.

Doing this, they proposed some improvements in some specific parts of the songs. Throughout this experience, we have learned a lot. Especially, when you use several layers of synthesizers, contributes to creating a more atmospheric sound that sounds better. Of course, we had a great time in the studio. And, listening to the songs coming to life, was incredible.

From“Nightfall”, you’ve released 3 singles: “Ghost”, “Nightfall” and “Mirror”. What can you tell about their videos?

On this occasion, both us and the label we’re on the same page because Napalm Records found these suitable as promo singles. Also, they represent the record at its best due to the featuring of Andy Doerner from Caliban, Mike Perez from No Bragging Rights, and Rudi Schwarzer from ANNISOKAY. We enjoyed working with them during the video shootings. For example, for “Ghost” where also Andy features, we rented a castle in Eastern Germany.

Well, I’m a big fan of horror gothic à la Addams family and we wanted to create something creepy. So, Andy needed only to wear a couple of black contact lenses and the trick was done. Though, the amazing thing about Andy is that he seriously pretended to be in a horror movie. Following the release of the video clip, I received a call from the owners of the castle congratulating us for the outcome.

But at the same time, inviting us for playing an acoustic show. I’m happy for its result because it was supposed to be creepy and dark in a slightly different kind of way. As it is right now, the video represents in its entirety the stark themes that are featured on “Nightfall”. Then, for “Mirror”, we have decided on a different approach because it’s one of the songs from the album that stands out. Indeed, in its structure, it has electronic sounds.

So, for this reason, we wanted a cleaner look. For shooting this video, we rented one of our favorite locations in Köln, a huge rock club. It was shot in a sort of rock’n’roll-ish way that resemble live streaming for its clearness. Just jump around, have some fun, and kick stuff around.

You mentioned a moment ago about the invitation from the owners of the castle. Is it something that SETYØURSAILS would be interesting to try? Is it something on which you have already thought about it? Then, how would you manage with the re-working of the songs’ arrangements?

You know, I like writing my songs accompanied by my piano. So, when I compose the song that are simply an acoustic version of what you listen to on the album. Indeed, this facilitates everything because I always keep on my computer the original versions. Then, since the chorus is quite melodic, there is the possibility to add some cells and violins. It would require some work but I believe the songs would work out pretty well. I would love to do that.

During one of the previous replies, you mentioned that being together with these producers you’ve learned a lot. What does it specifically entail? Also, whatever specifically will it turnout useful for the next time?

Definitely, one of these details is adding a lof of layers on the songs. For example, beginning with more atmospheric layers and then, the rest. Also, being brave in showing some softer sides. Since I have a soft spot for pop-py choruses, I think we have achieved on this matter the right balance in”Nightfall”. I would totally love to stick to this song structure by then, slowly building up to a more aggressive part. Even for the next album.

Hypothetically speaking, let’s imagine that all this terrible situation resolves itself and everything normalizes. Then, what would be the next plans for SETYØURSAILS?

Surely, working on more touring plans. So, to have more possibilities to feature to tour in different countries too. Because, as I mentioned before, we’re a live band. We need to perform live. We need to be on stage. Then, promoting our album as best we can.

Thank you, Jules, for this interview. I hope you enjoyed my interview. In order to conclude this chat of ours, it’s time for your message for your fans and our readers.

First of all, I wanted to thank you for having me. This was awesome. I really love your work. Please keep on doing that. Then, my message would be: since this album is a very personal one, because the lyrics are mostly about me. And my fight with depression which I struggle with it daily.

Firstly, if at least one person can relate with it and she feels understood, I’ve reached one of my goals. Then, please people stay safe, stay healthy because I’m sure that we’ll make it through this pandemic. Lastly, I hope to meet someone of you in the pit in front of our stages.