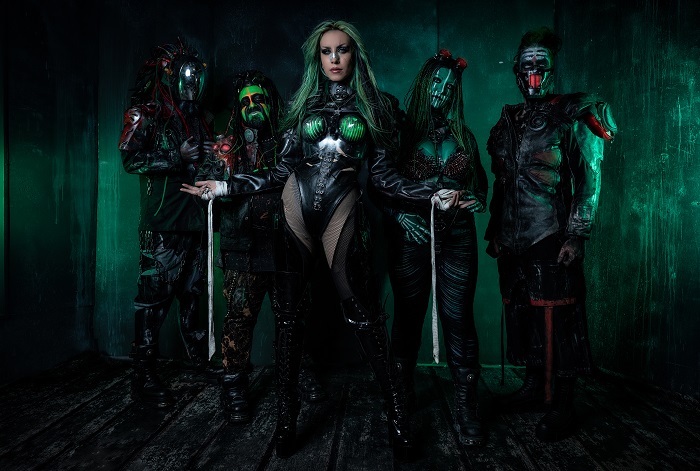 SICK’N’BEAUTIFUL – An Interview with Herma Sick

With their winning mix of rock, metal, industrial and sci-fi visuals, the Italian Sick’n’Beautiful are ready to rock the world with their new LP “Starstruck”. It’s the third full-length and the first one via Frontiers Music SRL. For this occasion, we had a chat with the singer Herma Sick and the guitarist Ray. Enjoy!

Hi guys, welcome to Femme Metal Webzine. Thank you so much for the interview. How are you? And how is this period treating you?

Herma Sick: Thank you for having us. It is a pleasure to be here. We’re happy and satisfied with everything that’s going on at the moment. Indeed, our new album is out. And the Kickstarter campaign for supporting the creation of our short movie “Starstruck” was unexpectedly successful. We are excited about our upcoming projects.

Ray: On the other hand, like everybody else, we are dealing with the pandemic, and now, with the war in Ukraine.

Herma Sick: It is up and down.

“Starstruck” was released at the end of July. And it represents the beginning of the collaboration with Italy’s Frontiers Music SRL.

How do you feel to have reached such a milestone? Considering that it is the band’s third album, how much difficult is it to keep challenging yourself? And not disattend the expectations?

Ray: First, it feels great to be backed by a label such as Frontiers Music SRL because we have complete creative freedom. Our ethos is to deal with each side of our creativity in-house, from the videos to musical production. With this album, we felt the need to bring our musical and visual side in a darker direction which is strange for a label like them.

As every music fan knows, Frontiers Music SRL focuses on AOR and hard rock, but they don’t mind how “Starstruck” sounds. Instead of the production, it is for sure consolidated. But for us, each album is different. We are a fully functional team. But this time, our lineup features two new guitarists. This new addition to Sick’n’Beautiful sparked our creativity.

Well, guys, you have just mentioned the band’s new members. Naturally, every guitar player has their technique. How this lineup change influenced both the album and the band’s members?

Ray: Well, both have a well-defined position in the band. The first is a rhythm guitar player, and the second is a lead. This last one joined the band almost at the end of the album production. The idea for this album was to have a four-piece formation. Then, we decided to have an additional guitarist because it is how Sick’n’Beautiful works at its best.

No matter this lineup change, our method for song composition is not changed. In the end, I am responsible for the bulk of the songs. Then, all the members come along with their proposals. Our secret is being a great team and having some stability helps.

As stated by Herma, the band set up a Kickstarter campaign for the shooting of the short movie “Starstruck”. In detail, what is about this visual production? And which is the trait d’union between the full-length and the mini movie?

Herma: Actually, everything happened after listening to the whole master “Starstruck”. Even if the album is not per se a concept, few songs share the same theme. Given this, we decided to write the main script about New Witch 666. She’s a witch from outer space and is one of the main characters. Indeed, the story is a fantasy, sci-fi story with few medieval influences. And there are some elements from “Mad Max” and “Dune” with Sick’n’Beautiful style.

Back in 2018, it was released the second full-length “Elements of Sex”. If you compare them, which are the main differences you have marked? After listening to the final master of “Starstruck” have you noticed any improvement?

Herma: There is the saying that every last album is the best one for an artist [laughs].

Herma: Probably, “Elements of Sex” is catchier, simple, more upbeat, atmospheric, and pop than “Starstruck”. We were simply in another and happier place as a band.

Ray: Then, the pandemic and its consequences played a decisive role in leading our musical production on a darker sound. It was not even a decision. It happened.

“This Is Not the End” and “Drop to the B” are the singles taken from “Starstruck”...

: Correct. Also, a couple of days ago, we released the title track. And the fourth is coming out on the album’s release date.

For each single, would you mind sharing some insights about them? Instead, what about the visual part? How do the videos reflect the lyrical content?

Ray: It is crucial to recall the lyrics are not composed with a script in mind. Getting back to “This Is Not the End”, it features this post-apocalyptic vibe which is an appetizer for the movie. Then, “Drop It to the B”, is quite the party song. It reminds me of “Elements of Sex” for its positivity and silliness. We wanted to show our fans that we did not forget our funnier side. Indeed, in this video, we included something that it has not done before. We collaborated with some dancers for some sexy dances. While the title track is more nu-metal influenced. We love KoRn and Marilyn Manson. Even if it is a collaborative effort, it is Herma who takes care of everything. She directs and creates the script for the video too.

As mentioned by Rev C2, you are in charge of the direction and writing. Which is the process that lies aside such productions?

Herma: In all of this, there is a little backstory. Everything started because we needed to shoot some promo videos. We did not have enough budget to collaborate with an external director. So, we learned the ins and outs, and it became our daily job. We are video makers. Kinorama Studios is the name of our studios. We are also involved with well-known Italian artists. Each time we deliver a project, I feel we are improving.

About the process, I proceed like every artist. When I receive a song on which I have to shoot a video, I listen to it several times while I am writing some notes that can match the song’s mood. Or I create a storyline that needs to go hand in hand with it or the band. It depends. However, Sick’n’Beautiful is a bit more complex.

Aside from the backdrop of a story, we add some visual details too. They might be film references that can bring alive the song and its atmosphere. Or it simply matches with the lyrics. We attempt to utilize all we possess in the studio to make it more realistic. Sometimes I exaggerate the details and the storyline, and Rev C2 financially tries in make ends meet [laughs].

“Starstruck” is out, and I am hopeful for you guys that you will have the occasion to promote this material. Will it happen?

Herma: Yes, indeed. We have a few shows in Italy, and among there is our release show. Then, we have some surprises coming up soon.

Unfortunately, this was my last question. Please be free to greet your fans and our readers as you wish.

Herma: We are happy and honored to be featured here on Femme Metal Webzine. Also, we are satisfied with the final upcoming of “Starstruck”. We cannot wait to be back on the road to meet our fans. I hope that these strange times will soon be a long distant memory.