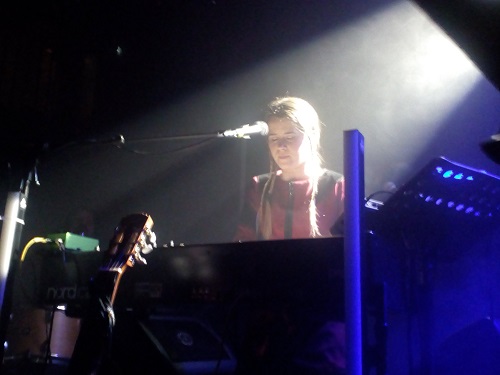 I do realize that it’s not the proper introduction that you might expected from me on the other hand, after so much years, I feel like we are among friends that I  would gladly let go of pleasentries. When I’ve attended the gig of Swedish artist Anna von Hausswolff on the 8th March 2018 at the Bitterzoet in Amsterdam (by the way, the best location ever for experimental music), I’ve experienced the landing of aliens on the Earth. The Swedish multi-instrumentalist is currently on an European tour for promoting her latest album “Dark Magic” out now via Pomperipossa Records and City Slang. Her music is so magnificent and crepuscolar that I call into question which meaning we should ascribe to the word “metal” nowadays: in truth, does it signify to propose a standardized musical structure established by the usual old canons or propose what to some extent would be vulgarly called experimental music? Well, I’m not the appointed person for objectively reply to this abstruse theory. Though, the fact of which I am really aware of is that in Anna von Hausswolff‘s music are merged at least three different peculiarities: the cristalline and innocent vocals who can recall the Danish post-black metal artist Myrkur, SUNN O)))‘s experimental attitude (and I’m stating this by having carefully observed the technical setting) and in conclusion, the artistic attitude of an indie artist.

I hardly disagree when printed media compare her to Kate Bush, if the British singer-songwriter was one of the first artist to introduce the concept of experimentation on a mainstream level, Anna von Hausswolff is something way more. Furthermore, it’s not nonsensical affirming that she must be considered to some degree the female version of  the American drone/experimental collective SUNN O))) –Anna and her organ on stage are one heavenly entity. From her shows, don’t expect an extravagant scenic design aside some multi-coloured neon lights: what you have to pay attention to is her raw energy that she expresses while playing and singing. So, after this considerations, what you should look forward to out of her shows? Although, some few days are passed by since her gig, I literally still don’t have the slightest idea however try to attend her show with no so ever expectations and get prepared to be overwhelmed and blown by her music. That’s the only heartfelt advice I can suggest you, for the rest it doesn’t count.