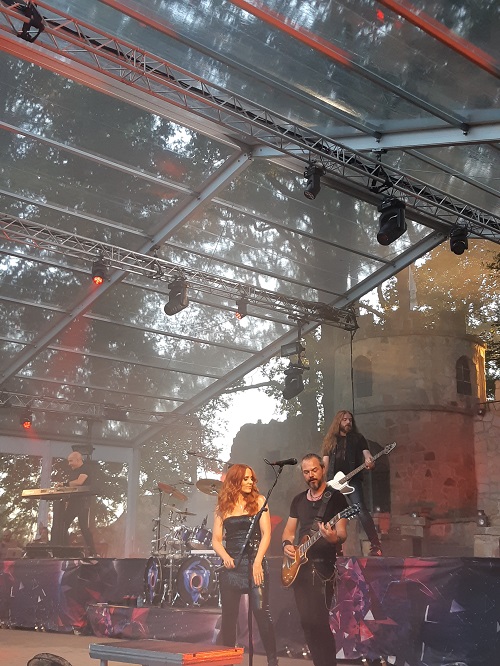 Before starting this live review, I would like to introduce a little bit the cultural context of how the events happened. When you say to a Dutch person that you are supposed to go in the Hengelo area (which is located in the east part of this tiny country, naturally it is really close to the German border), the reply is quite peculiar and it sounds like “Why the hell you go there?”. Everybody by now knows that I am Italian and for me, 180 km is practically nothing, however, for a Dutch person it might be an abysmal distance to cover considering the fact that this time the location was really out of nowhere. And it especially this particularity makes the concert so special! Hertme‘s Openluchttheatre is a real open-air amphitheater where

every summer Hengelo’s Metropool organizes its eponymous festival. For example, this year among the scheduled program was included Soft Cell‘s Marc Almond and jazz singer Caro Emerald. The concert that I’m about to speak about is quite extraordinary because sees the participation of the alternative gothic rockers Blackbriar and Mark Jansen‘s side project, MaYan as openers for the headliners Epica. The Dutch young band Blackbriar mixes efficiently both dreamy alternative and gothic metal thanks to Zora Cock‘s vocals which she surely gets her inspiration from bands such as Tristania and Sirenia. Of course, their musical roots lead back to the above-mentioned bands and in addition, the quintet adds that typical modern flavor in both their atmosphere and sound. The setlist played by this promising band was taken from the two self-released EPs “Fractured Fairytales” e “I’d Rather Burn”. As the highlight of their performance, I would mention the singles “I’d Rather Burn” and “Until Eternity”. Maybe, the only critique I can sincerely address to this young band from Assen is related to their lyrics which might result solely dedicated to a target of teens however considering the potential, I would sincerely take a leap of faith and give a serious chance to them. After a small break for changing the set-up of the instruments, there we start with

the second band: the symphonic death metal MaYan is on stage. As expected, during their short performance, they merely focused on their latest release “Dhyana” and the surprising fact is how the band improves, concert after concert, the alchemy between their several singers (which include Mark Jansen himself, the Italian soprano Laura Macrì, former Stream of Passion singer Marcela Bovio, former Orphanage member George Oosthoek and the talented American singer Adam Denlinger). Each concert is different and you can literally sense that MaYan is a musical beast in constant evolution. As a proof of this, their second album “Dhyana” shows a band that is constantly changing which also is capable to neatly blend their aggressive part with the most symphonic one. Consequently, even though their show might be short, here what really matters is the quality and not the quantity and the band has everything in order to be the next big thing.

As we already know, Epica loves their fan and their consideration towards their fans is quite high. Personally speaking, it is one of those band that during their live performance has never ever disappointed me but if I have to be critical towards them is it related to the setlist choice. In light of their extensive discography, the band should take the chance to vary more often the proposed songs on a live setting. Provided that, in the latest tour the band completely concentrated their promotional efforts on their latest release, 2017’s “The Holographic Principle“, in this occasion the Dutch

superstars have proposed a live setlist really variegated which have featured some old songs taken from even from their debut “The Phantom Agony”. Though, let’s start with some order: the magic starts with the intro “Adyta (The Neverending Embrace)” immediately followed by one of their classics, “Sensorium”. If we exclude the three main songs taken from “The Holographic Principle” which are “A Phantasmic Parade”, the single “Beyond the Matrix” and “Dancing in a Hurricane”, the evening in the distant region of the Overijssel has fully satisfied the longtime fans of the band because this night has to be regarded as an excursus between old hits (as “Martyr of the Free Word” and “Cry for the Moon”) and rare gems such as “Solitary Ground”, “Blank Infinity” and “Seif Al Din”. In this specific case, I would underscore the meaning of the words ‘rare gems’ because the aforementioned songs are seldom played live and they were respectively published on the second full-length “Consign to Oblivion” in 2005 and on the debut album via Transmission Records “The

Phantom Agony” in 2003. Undoubtedly, this was a surprise which has totally compensated the long traveled distance. Furthermore, I was truly in awe for Simone Simons‘s vocal performance throughout “Seif Al Din”.

Therefore, tonight’s setlist choice revealed to be exactly right. As per Epica’s tradition, “Consign to Oblivion” concludes their concerts by unleashing the habitual ‘wall of death’. The fans are aware of this and Mark Jansen steadily incites the crowd. The final advice that I can give you is to experience one time in your life an Epica concert in The Netherlands. When they play in their native country, they always manage to add that extra flavor in their performance and I’m genuinely attached to this concert for both its location and the choice of the played songs.