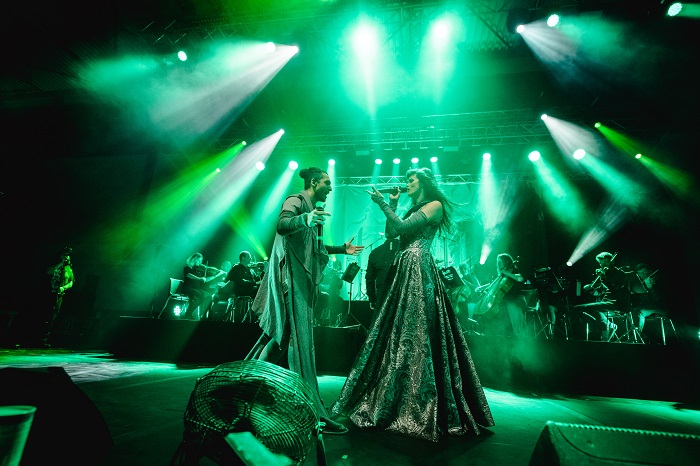 This time FMW offers you an exciting special article which include a live review and interview of one of the most exciting metal acts out there, Visions of Atlantis. The live review is about their show at the Cacaofabriek in Helmond that happened on 17th May. For this occasion, the article will include some live photos from the renowned Dutch photographer Anrico van der Linden. Together with the debutante Emetropia and the Italian war machine Secret Rule, the multi-national symphonic metal band was the headliner in this short Benelux tour.

However, let’s start with order. The Cacaofabriek is a small poppodia in the city center of Helmond. As with everything, this comes with pros and cons. Being so small, the number of places available is quite limited and the stage too. Consequently, the space for a lightning implant is restricted too.

If now we consider the pros, one of them is that you can come in close contact with the artists without any filter. And know and became friends with new fans. Objectively, there was just one issue shared by Entropia and Secret Rule: the combination and exaggeration of using blue and red lights.

Without further ado, Emetropia was the opener for this short tour. The Swedes recently released their debut album “Equinox” this year. Indeed for this young band, this small tour represents a golden opportunity to introduce their music to a bigger audience. Probably they miss the familiarity with a live stage. But their material proves that they hold the musicianship for their future. Just give them some time to grow.

Second, in order, we have the veteran Secret Rule. After eight albums, the Italian melodic metal band has nothing to demonstrate. Because with each release, the quartet has shown that it has what it takes to conquer the European stages (and non). What immediately attracts me is Angela di Vincenzo‘s magnetic performance. Give her an arena or a small club, for Angela won’t make any difference. She will spellbind you with her energy. Currently, the band is promoting their excellent full-length “The Resilience”. It is the perfect synthesis and collection of feelings experienced during the pandemic. States of mind such as pain, resilience, and angriness are on the stage during their performance.

And, now we come to the headliners of the day. The Austrian (Italian-French) symphonic strength metal band Vision of Atlantis is back with the new LP “Pirates”. As expected, the band delivered a great show by performing (mainly) new and old songs. Even though the band was one of the COVID victims, the band came out more determined than ever. Behind a group of people are always brothers and sisters who fight against bad times. VoA also represents one of the rarest cases where the line-up change has benefited from it. And still, you can see it. This live appointment is just an appetizer for what is to come because, as you will read below, the band will be back in the EU this fall.

Hi Cleméntine, welcome back to Femme Metal Webzine. First of all, thanks for the interview, how are you?

Thank you for your interest and time, we are busy concluding our US tour with Dragonforce and Seven Spires. I am in Las Vegas. Regardless of the pent-up exhaustion, it’s great to be back after two years on stage.

It’s recent news the announce of the upcoming full-length “Pirates”. Which piece of information can you share about its production? How did the pandemic impact the making of this release?

Since the forced stop, we had too much time to write the record. We dedicated it to the process of songwriting. Indeed, we had a complete redefinition of our musical and artistic direction. With this, we wanted to define which aspects were worth emphasizing in our music and universe. This brought us to choose some options. For example, involve for the first time a new producer. Plus, Jacob Hansen for the mastering. This led to an improved result and an enhanced sound for the songs.

In a way, your reply introduces my next question. “Pirates”, has a dichotomy between the brighter parts of life and the ones lurking behind. How much difficult was it to expose those feelings openly?

Per se, it’s not difficult is a choice but an unconscious one. When I was composing for this album, everything came together. My State of mind, my experiences, and my emotional conditions. Writing is self-reflective, and I write what I need to. Of course, with Visions of Atlantis, I write that even the listeners can recognize themselves in it. In the end, what I write is about universal feelings. Then, what I put on display is the inner part of my being.

In a way, it’s a sort of therapy. And, experiencing that, at the moment it’s emotionally intense to turn my feelings into music. But then, when I see the result, it’s very satisfying and helpful. The word which I would characterize this process isn’t difficult but intense because it’s super-personal and intimate to be able to define their positive and negative moments in life.

Both musically and lyrically, “Pirates” embodies a new form of transition and self-discovery. How does this release help you discover yourself and this transitional moment?

I would say that “Pirates” is more the result than the approach of what I’ve been through my path [laughs]. Indeed, some songs of “Pirates” reflect that. If “Wanderers” was the beginning of the self-discovery journey, “Pirates” is about the confirmation of what I want and what we want. In all this, freedom is part of it as like chasing our happy place in life. Indeed, these themes are recurrent in the album. I would also add that it’s the logical consequence of my journey. Maybe writing, helped me to realize what I have dealt with. It takes time to collect the ideas because it requires time to be digested.

I think “Pirates” is one of the greatest albums of Visions of Atlantis. Naturally, for the artists, every album is an extension of their lives. If compared with “Wanderers”, what does it makes “Pirates” so different?

The way we have worked on it makes it particular. It was so personal because we worked closely on the songwriting process. For the previous album, Michele joined when everything was already composed. Instead, this time he was more involved. That is something that makes a big difference. It feels more personal because the input comes directly from the band without external help. This album is unique because Michele enabled me to write the first song for Visions of Atlantis.

We can say that the singles “Legions of the Seas” and “Melancholy Angel Eyes” confirms what we have previously said. In this regard, what can you share about their lyrics?

For what concerns “Legions of the Seas”, after its completion, I realized that it was an epic song with different peculiarities. Due to its structure, it’s not a straightforward song. Besides a chorus and a verse, we have this development of our voices where they keep building up together. I immediately imagined a scene where these pirates at sea encounter a siren and try to resist being spellbound by her chant.

It develops as a sort of dialogue. Indeed, the slower part describes this struggle, it follows Michele‘s. Lastly, there is me with these initial verses where I dialogue with the captain about his adventure with the siren. The sole goal is to invite people aboard the ship for a journey. All these snapshots perfectly fit the song.

Then, we have “Melancholy Angel Eyes”. From the beginning, the single’s title was there. Subsequently, I had to compose the lyrics without considering that. It’s much more straightforward and pirate-related than the previous song. It’s more about a universal feeling which conveys the attempt to fight with the most inner and dark part of yourself. In this approach, you attempt to accept and embrace this part of yourself. In a way, in this song, I wanted to convey my fight and my success with this part and show people that it’s possible to embrace it and to be not overwhelmed by it. Therefore, I used some commonplaces where they reflect on themselves in this turmoil.

This year you have started your Patreon. Here, the main plan is exclusively to release new and unreleased songs. Is there any future possibility that it will collect for a full-length?

Patreon represents a space where I can release my music without external pressures from the musical industry system. It’s a refreshing free land for me. And for the moment, I’ll keep on releasing songs in that format. My Patreons are enjoying the first release that sees the collaboration of Michele.

Maybe, when I have some consistent material available, I’ll plan with the label and other people to see which options are feasible. But, for now, I want to explore the freedom of the writing environment. Then, I’ll see what I’ll come up with because there’s still no master plan.

Thank you for this interview and for dedicating me this time. Secondly, please recall to our readers VoA‘s live appointments.

After two years of stopping, we have a new festival season in which we will also play Wacken and Metaldays. On top of all, we have two occasions where we will play together again with an orchestra. It will happen at Masters of Rock and Metal on the Hill in Austria. People loved our gigs with the orchestra, so I invite them to join us in these two shows.

Then, people are inquiring about the tour which was supposed to happen in 2020. I have some good news: we will recover those dates in the fall. And we will play in new places like Scandinavia. Lastly, we will probably tour South America again or Oceania. Stay tuned and follow us on our social media for our upcoming announcements.

Thank you again, Clementine. Have a nice day.

Thank you [laughs]. Have a good evening.