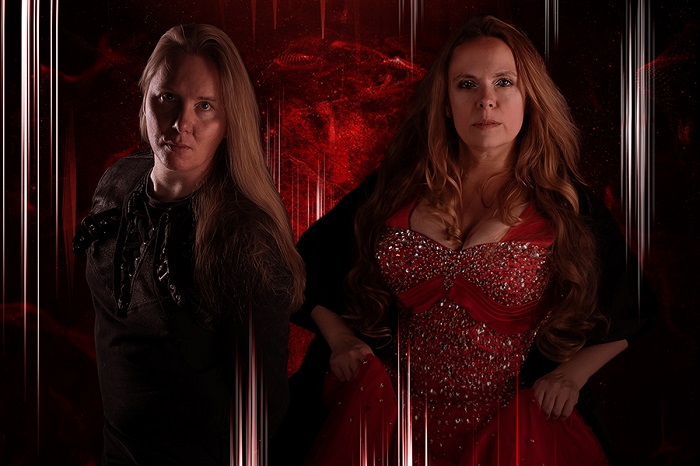 At the beginning of February, the extraordinary Melodic Metal formation NEVARIA from the Bavarian city of Bayreuth released its first new single “Reckless”, full of critical tones on dealing with the pandemic, and thus once again achieved considerable international success. In 2017, the debut album “Finally Free” was released via Dr. Music Records, with which the band really stirred up the scene with acclaimed live shows. Now acting as a duo, the musicians Tanja Schneider (vocals) and Markus Spiethaler (keyboards) follow up with the second new single “Battle Cry”, released today on 03/31/2022, again via Dr. Music Records, and carry on their vision of catchy Female Fronted Melodic Metal.

The young, untamed Metal guitar work combined with dynamic drumming, a perceptibly powerful bass and graceful keyboard melodies is thereby completed by the vivid, brilliant vocals of the former Dawn Of Destiny vocalist. Without leaving the chosen path, NEVARIA refreshingly evolved their independent sound with elements from electronic music and both new tracks were mixed and mastered by André Hofmann (Nothgard, Wolfchant, New Hate Rising), just like the album before. Focusing on just two songwriters provides a real boost in creativity and the mix of hard guitars and refreshing electronic vibes, enthroned by Tanja Schneider’s imposing voice, is impressively convincing.

NEVARIA also relied on the English VeryMetalArt video artist Andy Pilkington (Orden Ogan, Visionatica, Van Canto) for “Battle Cry”, who produced the lyric video with the complex theme behind the striking title with a grandiose audiovisual masterpiece giving the intensely bombastic song its visual punch. Photographer Gregor Zimmermann (Uzziel) takes the same line, presenting NEVARIA in a dramatic spotlight. The energetic song appeals to humanity to oppose the constant hostility from different directions. Especially regarding the current events, an important message to the entire world. Musically, the new single starts with a heavy intro that filigree fades into epic Melodic Metal instrumentation and is surged ahead by Tanja Schneider’s powerful voice. In contrast to the driving electronic synth arpeggios of “Reckless”, “Battle Cry” focuses more on the Symphonic Metal roots and combines bombastic keyboard parts with heavy guitar riffs along with punchy drumming.

The sound clearly pays tribute to the combative theme, as vocalist Tanja Schneider’s socio-critical lyrics are a passionate call not to judge anyone just like that or to pigeonhole them. Likewise, one should not blindly follow a crowd without questioning one’s own opinion or filling it with profound knowledge. The text is intended to encourage critical thinking, to stand up for more charity and to take action against hostility towards people or cultures with a different way of thinking. History should not repeat itself.

Therefore, now follow in the rousing revolutionary lyric video the appeal ‘Join in the Battle Cry’: