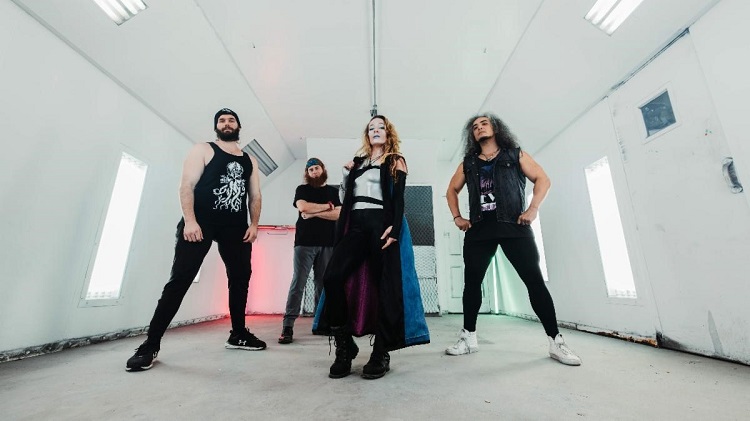 DMG CEO Maurizio Iacono comments on the signing:“Today we are proud to announce the signing of Orlando area heroes SEVEN KINGDOMS to the DISTORTION MUSIC GROUP family! I watched Camden & Sabrina’s dedication and hard work growing the SEVEN KINGDOMS name and music to new heights during the last few years. I was impressed with their support performances during the latest Unleash the Archers tour where the band showed a growing fanbase and a killer live show! After hearing the new album, it was a no-brainer for us to give the band the needed help to get them to the next level. Stand by for an adventurous melodic power metal ride that will rock your world!”

7K guitarist Camden Cruz says, “We are very excited to announce this new partnership with DMG. We were approached by Maurizio about his new label and their new model that allows a band like us to still retain our current working DIY Financing Model – but gaining the power of having a label behind you in promotion. This is basically a distribution partnership where DMG is responsible for getting our CD and Digital releases promoted and released into the worldwide chain again. This is something we lacked as an independent artist. DMG will be pressing and selling our CD. The band will be pressing and selling the vinyl, directly, and we were able to use crowdfunding and handle our own finances until we need to put CDs into the food chain. This is where DMG comes in. Maurizio has been influential in many big bands’ successes, and we are thrilled to open new doors with DMG’s guidance, experience, and push. We will sign the first 400 CDs we receive from DMG and these will be used to send to our backers! We are very excited for this year as we have so many things on the table. Maurizio has already helped us quite a bit, but it’s very cool that we get to take that next step forward with his team at DGM / Hard Impact. The future holds a lot of new and amazing opportunities for Seven Kingdoms, and we couldn’t be more excited!”

Zenith’ was recorded at Morrisound Recording in Tampa, FL, and 8 Arms Audio in Orlando, FL during the summer and fall of 2021. The record was mixed and mastered by Jim Morris at Morrisound Recording in November of 2021. The cover art was done by Jan Yrlund (Battle Beast, Korpiklaani, Windrose). ‘Zenith’ is scheduled to be released worldwide in June 2022 via Distortion Music Group.