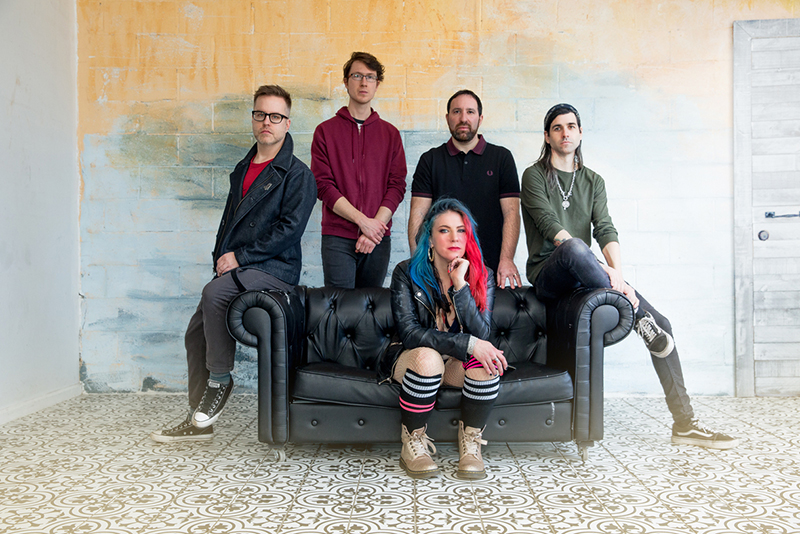 Brooklyn, NY’s Typhoid Rosie has unveiled “All I Need,” the third single off of the band’s upcoming album ‘Queen Of Swords’, out August 13.

The new song, “All I Need”, is another fine example of the empowering and thought-provoking bangers that Typhoid Rosie specializes in. The aural equivalent of a candy-coated razor blade, the track is a wee bit less “punk” and a tad more “pop” than the other two previously released singles (“Queen Of Swords” and “Defend Your Temple”) while still sounding very much like Typhoid Rosie. With a strong hook/chorus and a provocative story behind it, the single also features guest vocalist Coolie Ranx (Pilfers, ex-The Toasters, Grand Theft Auto, etc.) who sings the second verse and pre-chorus duet with frontwoman Rosie Rebel, while also contributing gang vocals.

Rosie says, of the track, “Since the very beginning, men are the hunters, and women are the hunted. I just think instead of treating women like something you shoot up and hang on your wall like a disposable trophy, maybe sit the fuck down, and think about how beautiful it is to explore the sexual wonders of a female goddess. So trickle in and let’s separate the men from the boys.

She adds, “It’s amazing that out of all of those dicks pounding on your door in the middle of the night, so few and rare are the real fucking men. What is the point of keeping people around who want the keys to the kingdom but can’t man up? What are they really adding to your life? This song is for all those special losers who must be banished, because quite frankly this is the “Queen Of Swords” record. It’s exclusive and you really do need to earn your rightful place inside these castle walls.

I dont care about people’s looks, I’m more attracted to people’s fire, hearts and minds. And if I was still roaming the streets, I’d pick a good man who moves mountains to love me. Not some bread-crumming loser. There’s so many people out there who will waste your time. They go from person to person like lost lil’ parasites. They don’t invest much time or energy. After they conquer you, they’re slithering off to the next meat buffet, always in search of greener grass, only to find that the grass dies wherever they go because they never learned how to water anything beyond their own instant gratification.

When you look at people, you never know what you’re getting. There are some good guys out there but also murderers, narcissists, womanizers, theives, shallow and fair-weathered fucks, energy vampires, creeps, liars, dirt-bags, dummies, skanks, power-hungry villains, and greedy mother-fuckers. Knowing what I know now about myself and others, I realize what a magical person I am, and it is so important for me to guard that like a holy treasure. I’m grateful for those losers who have come into my life and taught me that some people do not deserve to be inside you. I hate people who use women like disposable objects. I can’t wait until all of the Jeffrey Epsteins walking the Earth are thrown into the lake of fire…. but until then you can’t expect a creep to do right by you, and it is your job to guard your temple, and to know you are beautiful and worthy enough for a loving relationship. Love is all or nothing, so if you ever experience emotional poverty, tell that loser to keep it moving, cause you’re the motherfucking Empress!”

Typhoid Rosie is known for putting on an entertaining, fun, and high energy live performance. Pre-pandemic, they had been playing regularly mostly around the Northeast at places like The Knitting Factory, Brooklyn Bazaar, The Kingsland, Goldsounds, Coney Island Brewery, Arlene’s Grocery, Bowery Electric, VYNL. etc.