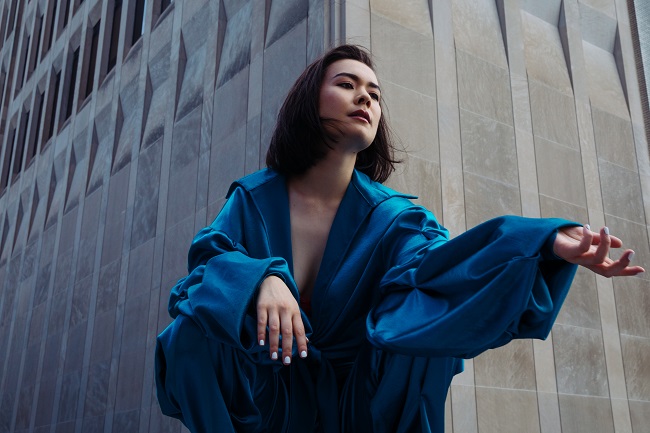 A laurel hell is an area of vegetation which is described by Horace Kephart in Camping and Woodcraft as “I asked them how they managed to crawl through the thicket. ‘We couldn’t crawl,’ he replied, “we swum”, meaning that they sprawled and floundered over the top.”

It may be there is a message from Mitski in all of this, or not. If there is a message it could be in the vein of the road songs, many bands produce about the hard side of life in the music industry. See “Long Way To The Top If You Want To Rock’N’Roll” by AC/DC. Or “Super Trouper” by ABBA for a couple of examples. The first single from the album is “Working For The Knife”. And it presents a bleak life experience with a similar theme elsewhere on the album. For example, on the track “Everyone” Mitski tells us, “Sometimes I think I am free / Until I find I’m back in line again”.

Inspiration for “Laurel Hell“ is rooted in Eighties synth-pop. As I have not heard anything from Mitski before this album, I cannot make any conclusions. But the “indie” label applied to this type of music, it is more a sign this is not like the over-polished celebrity music in today’s pop market. Have a look at the music videos for “The Only Heartbreaker”, “Stay Soft” and “Love Me More” to see the album in synth-pop mode.

I like the physical performance aspect Mitski uses in her visual work. Indeed, it’s most apparent in “Working For The Knife” and “Love Me More”. And it’s a slight nod to the animation in the classic video by a-ha for “Take On Me”. Elsewhere the album is slightly country. And Hall and Oates contribute a distinctive musical strain from their 1982 track “Maneater” on “Should’ve Been Me”. (Though on first listen I thought it sounded closer to a Chris Rea track.)

Overall, this is an intriguing collection of short tracks. Only two songs breach three and a half minutes and six songs are under the three-minute mark. The question I am left with is: whether this is a moment-in-time statement about being stuck. Or a stronger proclamation of dissatisfaction? It is an interesting way to interpret the lyrics as a conversation between Mitski and her fans. Whatever the case may be, the album sounds disassociated as a complete work. But taken individually the tracks are well-crafted slices of life, almost like a series of polaroids.